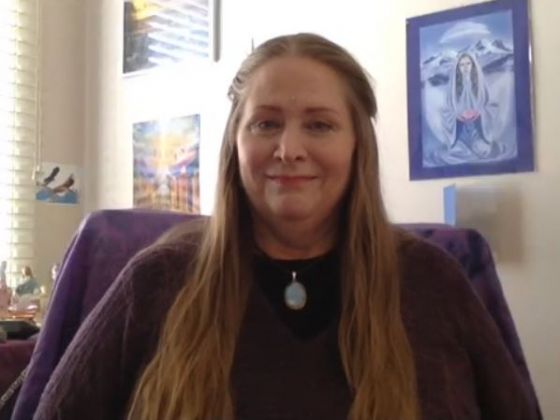 Lis Ana is an embodied walk-in, a "mystic midwife" for the birthing of new consciousness and New Earth, as well as a healer, code-breaker and encoder working with sound as a principle tool. Since Lis Ana's walk-in experience during the 2012 solstice, she has done grid and energy work in many places around the world, including the US, Bolivia, and Peru. Using crystal bowls and tuning forks, she has performed her non-traditional ceremonies in many temples, portals, and vortices, and uses the same tools in her healing and realignment work.

Alexandra and Lis Ana have an extraordinary rapport and their conversation touches on their many similar experiences of gridwork as well as their sympathetic understandings of the impending birth of New Earth. Lis Ana has unusual insight into frequencies, codes, and language, deriving from her work with sound. Sound is light, Lis Ana explains, and carries encoded information that directly impacts our DNA and chakra system, as it does Gaia's ley lines and 'acupuncture' points. Sound is a form of universal sympathetic vibration that goes beyond words or thoughts, but acts directly on consciousness and being.

Among the most engaging topics of discussion is the ongoing Ascension process. Lis Ana and Alexandra return several times to the idea that the old paradigm is extinct, even the parts that served us well, and that the new blueprint for humanity and New Earth is fresh and entirely unprecedented. They advise a clear intention to let go of old constructs and a total surrender to one's inner guidance and higher self.

Lis Ana says that our limitations are our old belief structures, our 'stories', and our memories, especially our traumatic memories. Indeed, our greatest limitation is our belief that we are limited. Alexandra and Lis Ana resoundingly emphasize the need for us now, more than ever, to transcend our fears by walking in our own authority and in our own truth.  Inner guidance is the only path forward, since, for most starseeds, Guardians, or Masters, there is neither the time nor the need for 'teaching' at this late stage of the game.

Water is as important to Lis Ana's vision as sound. We are mostly water, and water is structured by emotional vibration as well as sound, as Dr Masaru Emoto showed. Like crystals, it is charged in sunlight and by intent. Salt too is a fascinating subject of this interview, for it too embeds codes and vibrations. Lis Ana especially recommends a pink Himalayan salt, available on her website, derived from ancient oceans with ancient solar codes embedded in its crystalline structures.

Lis Ana and Alexandra share many interesting stories about their gridwork around the world and the fascinating encounters, extraordinary experiences and profound revelations that accompanied these key realignment activities. This fascinating, and high-energy interview culminates in a ten minute sound session with crystal bowls and tuning forks given for the public's benefit by Lis Ana. Sit back with earphones if possible and experience the beautiful and transforming frequencies of the session.