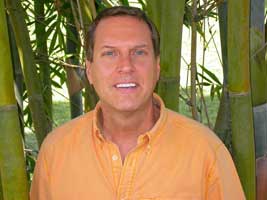 Ken Rohla is a natural health educator and inventor from New Smyrna Beach, Florida, specializing in rejuvenation and cellular regeneration using raw and sprouted vegetarian food, herbs, food-based natural supplements, detoxification, emotional healing, reprogramming of limiting unconscious beliefs, ancient esoteric techniques, and cutting-edge science. Formally educated in electrical engineering and computer science, Ken worked for 23 years in the medical industry, from the patient level drawing blood in hospital emergency rooms, to the national policy level, showing health care executives how to implement technology, as computer operations manager for the North Carolina Hospital Association. In 1993, at the age of 32, Ken was first exposed to natural healing in a search to cure severe hypoglycemia and other health problems he had acquired from a lifetime of poor diet and lifestyle. Eight years and many thousands of dollars later, after trying just about every diet, product, potion, and pill available, Ken found permanent success with living food nutrition and detoxification. After repeated requests from friends to share what he had learned, he began teaching workshops on detoxification and rejuvenation in 2003, and demand for his services exploded.

A cutting-edge researcher, Ken has studied with many pioneers in the sciences and natural health movement, including Gabriel Cousens, Brian and Anna Maria Clement, Viktoras Kulvinskas, David Wolfe, Brenda Cobb, Dean Martens, Dr. Robert Morse, Dr. Michael Epitropoulos, Linda Sheer, and many others. In 2005, Ken became certified as a natural health educator by Hippocrates Health Institute in West Palm Beach, Florida, and has been a guest lecturer there. Ken has been honored to work with Coretta Scott King, wife of the late Dr. Martin Luther King, Jr. Currently Ken's focus is developing natural solutions for the new severe threats to our health, including nuclear radiation, chemtrails, genetically modified foods and microorganisms, electromagnetic pollution, nanotechnology, biowarfare agents, depleted food, and other issues.

A tenacious researcher and experimenter, Ken uses and tests everything he recommends to find the most effective solutions for the least amount of money. He lives what he teaches so he knows what really works, and what doesn't — what's practical and what isn't, so that others can avoid wasting the many years and thousands of dollars that he did when starting out.

Ken doesn't just parrot the raw food dogma that abounds in books, media, and the internet. He seeks out the best natural healers in the world with proven track records and learns from them. He constantly researches better solutions, from ancient esoteric knowledge to modern cutting-edge science, and uses all of them himself and with others to separate the hype from reality. He will not recommend or sell any idea or product that he has not personally found to be effective.

Natural healing and health do not have to be expensive or complicated. The simplest techniques are usually the most effective, and often the hardest to do. Ken believes the best healing comes from nature. There is a perfection in nature that humans cannot duplicate or outdo. Many of Ken's clients and students have used these methods to heal themselves of cancers, hypoglycemia, diabetes, arthritis, tumors, multiple sclerosis, Alzheimer's disease, Morgellon's disease, high blood pressure, allergies, candida and yeast infections, addictions (sugar, alcohol, tobacco, drugs, and sex), depression, migraine headaches, chronic fatigue, fibromyalgia, high cholesterol, obesity, and more.