Our Next Episode: Sacred Circuitry

Join us on our next episode of the Expansion Point (May 7th) as Brad Johnson speaks on the purpose and potential benefits of sacred circuitry: sub-conscious light code sequences that assists with DNA activation, synaptic enhancement, Energy re-organization, consciousness enhancement and much more!

Live calls will be taken near the end of the show. Call in for questions, comments, feedback. 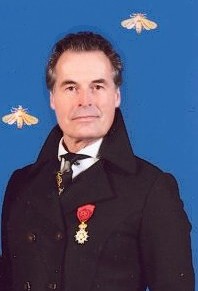 Count Alexandre Bothuri Bàthory is a descendant of the Royal Bàthorys who ruled Transylvannia and Hungary in the Middle Ages and were ranking members of the Imperial and Royal Dragon Court and Order founded by the Holy Roman Emperor Sigismund. Alexandre is an art collector and author. His new novel is entitled She Messiah.

Alexandre de Bothuri Bathory is a direct descendant of the noble Bathorys who were the rulers of Transylvania and members of the Imperial and Royal Dragon Court of the Holy Roman Emperor Sigismund.

Alexandre was born at la Faisanderie in Chatou (Le Vésinet) France in 1954 to a prominent noble family (Hungarian and Italian descent) who are known in history as Important Art collectors and patrons, Museum and University founders, as well as Archaeologists and Landowners in Burgundy, France, Hungary, Poland, Tuscany, Russia and Greece. At one point they owned the most important collection of Thrace Gold artefacts discovered on their domains, which was confiscated after WWII and never recovered.

After graduating from Saint-Cyr and Stanislas College in 1969, he followed the steps of his physician grandfather and entered Medical School in Paris but also attended Art and History classes at the Sorbonne and at the Ecole du Louvre under the guidance of scholar Madeleine Ours and with his friend Caroline Kennedy, President Kennedy's daughter, and later Queen Farida of Egypt. During those years he developed then a special bond with Queen Farida of Egypt, President Leopold Senghor from Senegal, Richard Nixon, Mr and Mrs. Ronald Reagan, the future US President and first Lady, former King and Queen Michael of Romania, the Giscard d'Estaing, President and Madame Georges Pompidou, President Charles de Gaulle  (a visitor at the family castle near Bourges during Alexandre's childhood), Princess Sybille de Bourbon-Parma, the Royal Family of Yugoslavia, Prince Orlov, and the late Princess Grace of Monaco who shared the same passion for painting, poetry and humanitarian causes.

Alexandre is a well-known history scholar specializing in Middle Age studies, Joan of Arc, the Stuart dynasty, the Crusades, the Italian Renaissance, the Neapolitan School, French painting of the 17th to 18th centuries and the Napoleon era (owning part of the original Templar Archives and Beauharnais-Leucthenberg' s Archives). He is involved with Medical Research and collecting Royal Art of historical importance and provenance for the permanent collections of Major Museums and Exhibitions all over the world, including the Louvre, the Château de Fontainebleau, Versailles Château -Musée, Château de la  Malmaison, Chaumet Museum in Paris and Hong Kong, The Metropolitan Museum in New York, The Montreal Museum of Fine Arts, the Stewart Museum, the Haggerty Museum in Milwaukee, the Chicago Art Institute, the Frick Collection, The Bard Graduate Center for Studies in the Decorative Arts New York, The Nassau County Museum, Rosslyn Harbor, The Getty Museum, California, The Osaka Museum, Japan, to name a few of them.

The "de Bothuri-Bàthory Collection" is currently a label of excellence and provenance known around the world by Museum curators, Art scholars, students and so far by a large public in America, China and Europe.

Alexandre's ultimate goal is to establish a permanent Museum to display his entire collection and extensive library in Seborga or someplace else that could benefit from the assistance to the local economy and culture it would bring.

The Expansion Point is an exciting, insightful and cutting edge radio talk show unlike any other. Hosted by Brad Johnson: Conscious Matrix Communicator, Psychic, Channeler and Author; you will be taken on a journey into the depths of universal consciousness as new ground is broken. The Expansion Point will cover such topics including: how to enhance your ESP ability, how to channel, frequency & vibratory fundamentals, ET awareness, Ancient Earth and Galactic history, humanity’s powerful positive future, time travel, dimensional mechanics and much more!

You will also have the opportunity to interact live with Brad Johnson as live calls are taken near the end of every bi-weekly broadcast. Be a part of a radio talk show that’s truly one of a kind and will help you to reach your point of expansion!