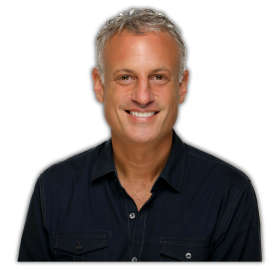 I: One M.D.’s Inward Journey to Liberate Himself from Mental Suffering---And The Help It Offers for Those Diagnosed Bipolar, Mentally Ill or Depressed

The diagnosis of Bipolar 1 Disorder– by medical decree and societal perception— is a lifelong sentence: unless you take and stay on prescription medicine you cannot function as a “normal, sane member of society.”

But Jeffrey R Fidel, an MD himself, is proof that is not true.

And he got there by turning off the voices in his head and listening to the one voice that counts—the one in his heart.

In his beautiful, masterful and minimalist book: I: One M.D.’s Inward Journey to Liberate Himself from Mental Suffering---And The Help It Offers for Those Diagnosed Bipolar, Mentally Ill or Depressed, Jeffrey Fidel provides insight into his story and how he used the ancient teachings of Lao Tzu's Tao Te Ching, to connect to a voice originating from his heart, the "voice within" that teaches our true identity is "beyond thought" and that we and the universe are I(One)...

Jeffrey relates how he spent most of his life identifying with the I that was the I in his mind—the one that said he must achieve to exist...the one that drove him to become a doctor in order to meet other people’s expectations despite a part of him that resisted; the one that said he would be happy if he lived the “American dream” of exalted professional, family man and financial success. This was the “I” of his ego.

Yet, he was miserable and the critical voices in his head kept getting louder, driving him to seek a psychiatrist. And when they reached a crescendo, Jeffrey was diagnosed with Bipolar 1 Disorder and placed on antipsychotic drugs.

Feeling numbed by his “chemical lobotomy” he continued to “fit into” society as an individual and practicing physician. Yet, nothing in his life was right—his marriage was falling apart, he still had an inner struggle that he didn’t want to practice medicine, and even his beloved dog died.

Through many ups and downs and searching, he came to the Tao Te Ching. It spoke to him and awakened his awareness that there was another voice, a quiet one that spoke truth to him, a voice that connected him to all that is. Then, he knew that he was not his mind, he was his energetic essence, something unknowable and unlimited. When, through a year of deep solitude, he became convinced following this voice was the real path to a life of mental and emotional freedom, he tapered off his meds, quit his medical practice and focused on living the life directed by that inner voice.

Today, Jeffrey lives a contented, complete, humble and drug-free life in Florida—living in the present moment—and spreading the word for others who have been diagnosed as depressed, mentally ill or Bipolar that he has found another way to end mental suffering. As he tells his story, he is an inspiration to others that listening to the “one voice that counts” may provide a different path to peace and a new way to live.

If you would like to interview Jeffrey R Fidel, MD on “I” and his journey to free himself from mental suffering, please send an email with the name of the show, your contact information, a proposed date and time, and the calling details.

Jeffrey R. Fidel, MD refuses to live his life medicated for Bipolar I disorder. In near complete solitude, he endured nearly a full year of intense mental anguish. Utilizing mainly the ancient teachings of Lao Tzu’s Tao Te Ching, he learned how to connect to a voice originating from his heart.

Dr. Fidel is now sharing these ancient teachings to help others discover their answer inside. He says, “By quieting the constant chattering of our minds, we begin to hear the inner voice that originates from our hearts. By surrendering the ‘thought of who we are,’ we can begin to accept this inner voice as our teacher. This inner voice teaches us that we are one.”

His hobbies include classical piano, snow skiing, math, and science. He currently resides in Florida with his son, Andrew.