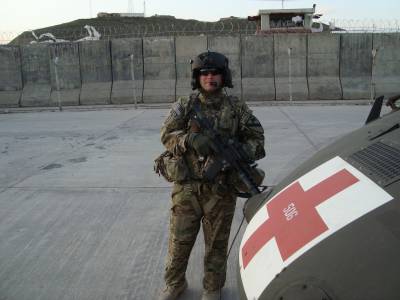 My name is Brian Ellis.  Much like many other veterans, I was compelled to join the military after the September 11th attacks on New York and the Pentagon. On December 20th, 2001, I proudly raised my right hand and enlisted in the Florida Army National Guard as an 11 bravo Infantryman. I attended The Army’s Infantry School at Fort Benning, GA, from March 11th to June 14th of 2002. After completing infantry school, I proudly became part of the 53rd Infantry Brigade and assigned to C Company, 2-124 Infantry, out of Orlando Florida. However, my return to civilian life was short-lived because on December 24, 2002, I was activated by the Florida Army National Guard and ordered to report to the armory on December 26th for my first deployment. By January first, the unit was sent to Fort Stewart, GA for pre-mobilization training.

By the end of February 2003, the unit was sent to the country of Jordan for the Invasion of Iraq. During my deployment, C Company, 2-124 Infantry was attached to 5th Group Special Forces ODA 571 as quick reaction force, pilot recovery, POW processing, security and general support for our first mission. When our mission in the Iraqi desert and Jordan was over, we were all sent to Baghdad and attached to many other units. Our missions included, force protection, patrolling the streets of Baghdad and the Tigris River. On September 8, 2003, I was injured and medevacked out of Baghdad; I was sent to Landstuhl Medical Facility in Germany. From there I reported to Fort Stewart’s Medical hold battalion until I was rehabilitated and released from active duty.

After release, my injury forced me to re-class, so I left the infantry in 2006 and moved from unit to unit until December 2007 until my contract was up. Instead of reenlisting I took a short break from the military and went into the Individual Ready Reserve (IRR). However, by April of 2008, I found myself talking to a recruiter and decided to join an Army Reserves aviation unit as a Blackhawk mechanic. Shortly after my MOS training at Fort Eustis, VA, I began my flight training as a UH-60 Black Hawk crew chief in a newly formed Medevac unit. On Oct 20th 2011, my unit mobilized to Fort Hood, TX then to western Afghanistan where we were attached to the First Cavalry Division and the 12th Combat Action brigade for Medevac support. My platoon ended up in northwestern part of Afghanistan called Bala Murghab on Forward operating base (FOB) BMG. For the next nine months, I flew over 50 Medevac missions.

Although I finished my deployment in Afghanistan, I returned home somewhat lost and physically broken. I suffered from extreme chronic pain and loneliness that caused bouts of alcoholism, isolation, and self-destruction. Thanks to the hard work of the men and woman of the Tampa VA hospital’s Center for Post Deployment and Education (CPHE), I am in recovery from alcoholism, and the effects of PTSD are manageable. However, I am still working on my progress to better my  quality of life.

During my time at the VA, I was asked by a member of the CPHE  to develop a program that would help other veterans’ transition and recover from Post Traumatic Stress Disorder (PTSD) from a veteran’s point of view. I began my program in April of 2015, at the time, the CPHE had between 20 to 30 patients enrolled; the program I put together lasted 22 weeks and included groups and one on one mentoring sessions under the supervision of licensed mental health practitioners. The program was a success, both veterans and VA Peer Specialists utilized the program to help veterans.

In all, I spent over 700 hours volunteering as a Recovery coach at the Tampa VA.  After obtaining my State of Florida Peer Specialist certification in October of 2016, I begin working for the Society of St Vincent de Paul. As a veteran Peer Mentor and homeless outreach specialist. 90 percent of my time was spent calling shelters, walking in the woods and combing streets to locate homeless veterans. During this time, I learned more about people in a raw environment and why they end up homeless and walk away from society. It is my goal to become a Licensed Mental Health Counselor (LMHC) and a military culture awareness trainer in the near future. My drive is from my own experiences, I truly believe that properly trained and educated veterans are the most qualified to help the veteran population and their family ease the pain of transition and recovery.