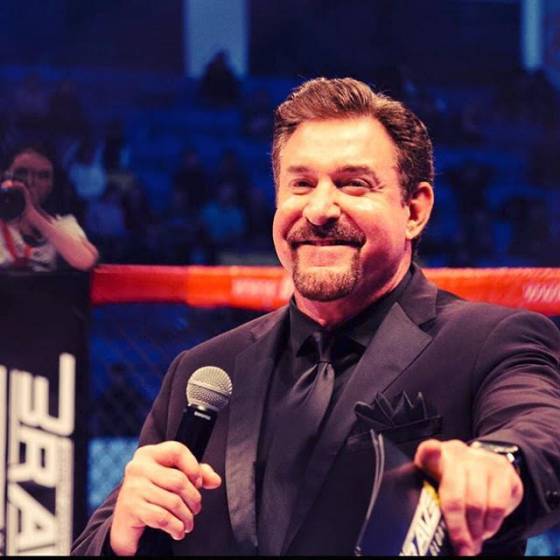 Our guest will be MMA (Mixed Martial Arts) fight announcer Carlos Kremer.  Carlos is a graduate from UC Davis & a graduate from OCS. During his time with the Marines as Captain, Carlos received two Navy Achievement medals. He also held the position of Series Commander. Only 5% of all officers have been awarded this rank. While in the Marines Carlos was nicknamed "The Master Motivator" due to his accomplishments & his positive demeanor. 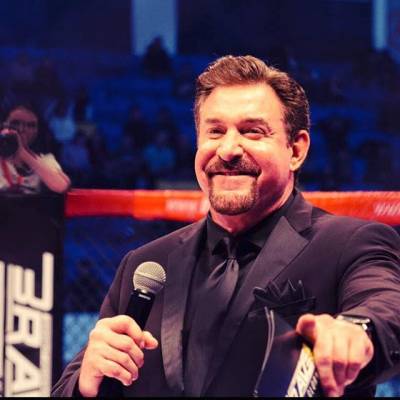 The advertising industry would have us believe that The Most Interesting Man in the World hangs out in swanky cocktail lounges and pushes Dos Equis beer. In reality, that title belongs to San Diego’s very own Carlos Kremer.

Carlos Kremer is San Diego’s Renaissance Man. He first appeared on our radar as the announcer of Epic Fighting and host of Epic TV, but when we sat down with Carlos, we discovered that he actually wears many more hats in the San Diego community.

Carlos, a native of Northridge, California, was recruited out of Crespi Carmalite High School to play both football and basketball at UC Davis. He went on to star as a Defensive End for the Aggies, but had his football career cut short due to a serious knee injury that would require 11 surgeries in total.

Upon graduating UC Davis with a Communication degree, Carlos went to OCS (Officer Candidate School) and received a commission as an officer in the United States Marine Corps. During his time in the Corps, Carlos achieved the rank of Captain, received two Navy Achievement medals, and held the position of Series Commander, of which only 5% of all officers are awarded. “I really enjoyed my time in the Marines. I felt it was something I had to do as a commitment to myself and the country,” Kremer said. It should also come as no surprise that Carlos earned the nickname “The Master Motivator” while in the Marines, as you can see from his accomplishments and overall positive demeanor.

Carlos also competed in boxing during his time in the Marines. Carlos was the Great White Hope as a Heavyweight contender here in San Diego. Following his boxing career Carlos became a fan of BJJ (Brazilian Jiu-Jitsu) when Royce Gracie exploded on the scene in the early 90’s and his interest continued with the evolution of MMA. He trains religiously with legendary Brazilian Jiu-Jitsu professor Eduardo Telles, and is currently preparing to test for his purple belt.

In his younger days, Carlos used to get into a little bit of trouble, but used the Marine Corps, Boxing, and MMA as a way to get himself on the right path. “I grew up fighting a lot, and kind of turned over a new leaf when I found boxing and MMA. It completely mellowed me out. So, MMA, for me, and that outlet has been huge, as it has been for so many people. It’s been great and I really think it saves a lot of these kids off the street and gives them focus,” Kremer said.

That helps explain why MMA is such a vital part of Carlos’ life. Along with his role at Epic Fighting, Carlos, the President of Kremer Insurance, also sponsors 99 teammate and Bellator pro Sergio Rios and undefeated fighter Zac Savage. Kremer Insurance also insures various local gyms, including Open Mat and Intensity MMA. Carlos also hosts a weekly radio show entitled “Carlos Kremer Kick Ass Radio!”. While this might seem like a lot of responsibilities for one man to take on, Carlos views it as a golden opportunity to do what he loves. “I do all of this for my passion. My only goal is to take MMA higher. These local guys that we have in this mecca of the world for MMA don’t get enough exposure; don’t get enough credibility or accolades. The gyms in San Diego are amazing, but they’re not getting the right props.”

It is this drive that has established Carlos as an important fixture in the San Diego MMA community. But Carlos is also heavily involved in the professional and entertainment community as well. Carlos hosts red carpet events in L.A., has hosted various radio shows in San Diego, and has appeared on famous TV shows such as The Dating Game, American Choppers, and Gene Simmons’ Family Jewels. “I’m normally drawn to anything with a mic. I love to be involved in any way,” Kremer explains.

On top of that, Kremer has owned his own insurance agency in San Diego for the last 18 years, receiving multiple awards, which include the “Toppers Club Award” seven times and the prestigious “Championship Award Club” twice, which is bestowed upon the top 2% of agencies nationwide. Carlos also performs stand up comedy, which he uses in a similar way that he uses MMA – to entertain others and to stay sharp. “Comedy is the most pure thing you can do and the most challenging thing you can do. It’s kind of like Jiu-Jitsu or boxing, or MMA. You can’t lie. You’re either funny or you’re not. Every time I do it, I go, ‘why am I doing this?’ Even today, I ask myself, ‘why have I agreed to do this?’ But overcoming that fear keeps you sharp for everything else. I do it to stay sharp for what I really love – hosting MMA.”

Comedy has given Carlos a thick skin, which you need if you’re going to be in the spotlight as much as he is. When you watch Carlos host an Epic Fighting event it becomes immediately apparent that he is extremely comfortable in front of a crowd.

The pairing of Carlos and Epic Fighting is a natural fit. Carlos pointed out that the head of Epic Fighting, Jason Stewart, has done an incredible job with the company and the Epic team. “Epic’s grown and grown and grown. We’ve got the basis and the format there. Jason has done an incredible job, and it just keeps getting better. I am proud to be part of the Epic team and we are doing great things in the MMA world,” Kremer said.

Through all of these experiences and avenues Carlos has created for himself, he has been able to fulfill his passion and has positioned himself to help others do the same. “I’m at a point now where if I can help someone, I will. If I can mentor someone, or reach out and expand their career, I’m all about give and get back, and that’s what makes me happy now,” Kremer said.

That fact cannot be stressed enough. During my interview with Carlos, he showed a genuine interest in the Fight Voice and our mission. While I was trying to learn more about Carlos and his story, he kept providing me with advice and tips to further the success of our site. That’s just the kind of selfless and authentic guy that Carlos is. During his time in the Marines, Carlos learned to always be tactful and always treat people well. “It’s the Marine part of me,” Kremer said.

I also witnessed this when Carlos let me sit in on his weekly radio show with guest Manolo “El Hurricane” Hernandez from San Diego Combat Academy. Without any hesitation at all, Carlos let me chime in on his show, which was a big honor for me and the Fight Voice. His skill as an entertainer is obvious when you watch him effortlessly conduct his on-air interviews and bring out the best in his guests. He has that natural ability to put everyone around him at ease, and thus his shows have a great flow.

Carlos has already achieved so much in MMA, but it seems he is just getting started. He has already medaled twice in the World Jiu-Jitsu Championship and Pan Am Games, and plans on competing again in the Worlds in October. “It’s been an amazing ride for me, and it just keeps getting better. It’s been great for me to just be able to follow my passion, and now getting some good following and feedback – it’s just icing on the cake,” Kremer said.

“I’m just following my passion…I’ve been really appreciative of how the MMA community out here is so cool. Everybody has been very welcoming. And we’re trying to help them out. The main thing is helping these guys get the attention and exposure they need.”

It’s obvious that Carlos has the determination and the drive. “[Due to football injuries] I was taken out of competition ‘like that’, and not on my terms. So now I’m competing because I want to taste that again. It’s not even about winning or losing for me. You go in to win, but it’s just about just being there and just experiencing the rush. It’s a journey. I’ve worked hard to be here and we’ll let the chips fall as they may. It’s been a good ride,” said Carlos.

Carlos has his finger on the pulse of the San Diego fight community and is doing everything he can to help promote the field and assist others in achieving their goals as well. “I’ve learned that if you’re going to do something, then just do it, and do it as best you can and let everything else fall into play,” said Kremer.

It is clear that Carlos is doing that for the San Diego community, and everything is falling into place, and then some, for The Master Motivator.

You can check out Carlos on Epic TV, see him live at the Epic Fighting events, catch one of his standup comedy routines, and check out his weekly radio shows “Kick Ass Radio” at http://wsradio.com/. Follow Carlos on twitter @TheLosKremer