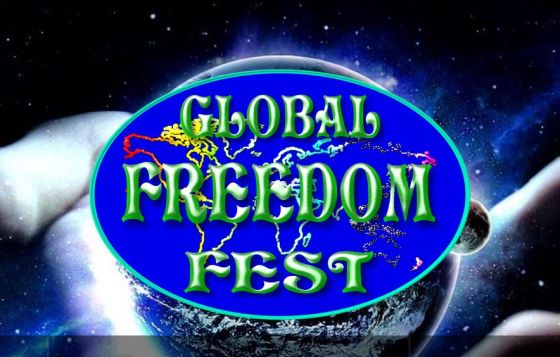 The Global Freedom Fest, to be held next year, promises to be the metaphysical Woodstock of the 21st century.

In this interview, Alexandra speaks with Stash, the founder of the event and Troy Mathisen, co-founder, about their vision for the festival. To be held simultaneously in multiple venues across the world, the Global Freedom Fest will celebrate a new paradigm of Source-granted inalienable freedom, mutual trust, global unity, cooperative respect, and heart-centered community among all members of the human 'tribe'.

Stash and Troy offer here their spiritual and global vision for the event and spell out the practicalities and necessities involved in its organization. Galactic Connection is proud to ally with Global Freedom Fest's organizers to publicize this exciting and promising event. We encourage our listeners and readers to attend closely and, if so inspired, to assist its successful realization.

Tentatively scheduled for September 2018, the Global Freedom Fest will take place over a week and in several locales around the world. It will highlight many kinds of entertainment, new technologies and alternative energy production, and organic agriculture, as well as a variety of healthy culinary traditions.

As a centerpiece of the celebratory festival, the entertainment offered will include music, dance, visual arts, and crafts. The new technologies demonstrated will include zero-point free energy systems. Sustainable forms of agriculture and production will also be shown. These may be left as an asset to the site and locality after the festival for continued year-round use.

The economic and political aspects of the event are as revolutionary as the celebration itself. With the intent of detaching from the fiat currency system now oppressing humankind, an asset-backed currency, a "Global Freedom Dollar", will be introduced at the festival, to be exchanged for the fiat currencies now in use around the world. All profits from the event will be placed in a transparent public trust, which will be used as a fund to generate and sustain the event itself and other projects whose aims and intents cohere with the global and spiritual visions of the Global Freedom Fest.

Troy Mathisen provides legal and technical support for the project. In this interview Troy explains the importance of founding the Global Freedom Fest upon principles of natural law, and natural people, rather than depending upon corporations and fictive incorporated "persons" operating now within corporate and admiralty law.

The Global Freedom Fest will require specialists across the spectrum of skills and experience needed for large-scale event production. Stay tuned to the interview for opportunities to assist. Galactic Connection also encourages our audience to check out their website, GlobalFreedomFest.Earth for further information and festival opportunities. We will continue to update our public as to the stages of development of this exciting project celebrating the New Earth that is increasingly within our reach.