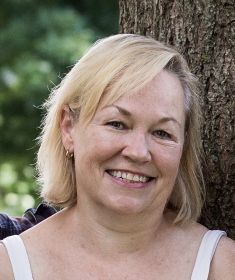 Guest for Your Show

Why Do Good Women Stay With Bad Men? Are Political Wives are Just as Calculating as Their Infamous Husbands? Or Do They Have Other Motivations?

As a leading political reporter, Anne Michaud covered Bill Clinton's 1996 re-election campaign, Anthony Weiner's 2005 mayoral bid and Eliot Spitzer's rise and fall as New York's governor from 2006 to 2008. Few folks have had the front row seat to the spectacular fall from grace of these politicians and the women who endured the cataclysm with them.

Which got her wondering--as so many of us have--why did most of these women stick it out--or stay for as long as they did? Were they simply doing the Stand By Your Man blues, or did they have other motivations?

Why They Stay: Sex Scandals, Deals, and Hidden Agenda of Eight Political Wives is the result of her musings and her deeply researched and fascinating analysis.

Now a Wall Street Journal reporter, Anne has chosen to look at eight couples and explore the similarities between them-how the women responded to the crisis and its aftermath. These women made bold decisions that revealed their own agendas.

Anne found some interesting correlations between all of them and Elizabeth Woodville, the "White Queen" of English history. A widow, she married Edward IV for love, endured his promiscuity to stay and wield power, and ultimately, outlasted him to build the Tudor legacy through engineering her daughter's marriage to Edward's successor.

Anne looked at 5 factors in her books­--how deeply are these women committed to being the family emotional caretaker, how patriarchal values drive their actions, how motivated are they about building a family legacy, the degree of which financial and emotional security drives their actions, and do they have a sense of patriotism that inspires them to overlook the misdeeds of their husband for the greater good. She assigned each a "White Queen Quotient" measured against Woodville's iconic role as the ultimate political spouse in the face of scandalous male behavior.

While we as spectators can only speculate about what drives them, Why They Stay makes a great case for what causes each of these women to play out their roles as stay-beyond-the-embarrassment wives. If Hillary Clinton had left her marriage, she might only be known as the spurned wife of a retired politician. Instead, she became the first woman to run for U.S. president on a major party ticket, a U.S. Senator and Secretary of State. These political wives aren't powerless pawns. They are shrewder than you expect. Why They Stay pulls back the curtain to reveal why women throughout history stand by their man...for better and for worse.

In addition to her reportage at the Wall Street Journal, Anne previously wrote a nationally syndicated op-ed column for Newsday from 2008 to 2018. She has won more than 25 writing and reporting awards and has twice been named "Columnist of the Year," by the New York News Publishers Association and the New York State Associated Press Association. Her work has appeared in the Los Angeles Times, The Boston Globe, Newsweek, BusinessWeek.com, Crain's NY Business, Cincinnati Magazine and more. Anne has appeared on numerous television and radio programs, including WNYC's The Brian Lehrer Show, NY1's Reporters' Roundtable and Fox 5 News WNYW.

If you would like to interview Anne Michaud on her fascinating look at these eight political wives, please send an email with the name of the show, your contact information, a proposed date and time, and the calling details.

A veteran political journalist, Anne is areporter for The Wall Street Journal. Shepreviously wrote a nationally syndicatedop-ed column for Newsday and has wonmore than 25 writing and reporting awards.She was named “Columnist of the Year,” bythe New York News Publishers Association.