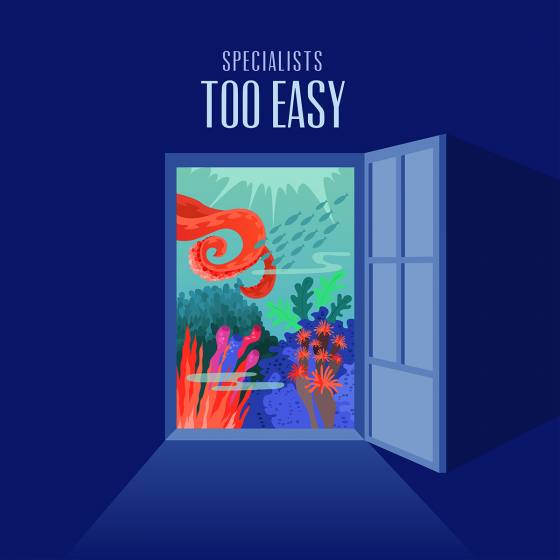 Please view all assets via google drive at https://drive.google.com/drive/folders/1IUaOqBC8t9DkxCP_0JSt11ULd2miBGKC?usp=sh…

Lush and well crafted rock with groove, Specialists music puts you in an atmosphere somewhere between funk & psychedelics.  Initially, creating this set of songs was challenging for the duo as they were written & recorded entirely during quarantine over the internet.  After powering through the disconnected nature of crafting these tunes, Too Easy has become Specialists’ most refined release to date.

The EP kicks off with the powerful, Thanks, Boss- a pop-funk song with uplifting synthesizers, funky guitars, & enticing vocals; all separated by an impressive jazz-rock head highlighting the group’s musicianship. Second on the tracklisting, Be Easy, is a funk-rock staple in Specialists’ repertoire. Come Over is a seductive stand out track where Specialists explore their R&B influences. Listeners will find themselves enamored with the skips & hits embedded within this song. Down n Out, released as a single in April, has been described as “powerful, funky, & efficient.”  It’s impossible to not stay stunned while listening to this.” Finally, Wake Up caps the EP.  An epic song about keeping your mind & body in tune with your surroundings. It kicks off with an edgy, rap-influenced verse, followed by progressive rock instrumental sections, & a melodically dramatic chorus filled with internal emotion. This song is an appropriate send off.

As a result of this project being written during quarantine, the lyrical content uses intense imagery to depict an imaginary social life. Specialists found themselves writing about social interactions that they’ve gone so long without. Within the dual vocal parts, you will find a characterization of the bandmates themselves singing about where they long to be.