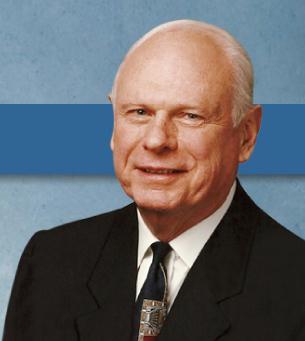 PAUL HELLYER is one of Canada’s best known and most controversial politicians. First elected in 1949, he was the youngest cabinet minister appointed to Louis S. St. Laurent’s government eight years later. He subsequently held senior posts in the governments of Lester B. Pearson and Pierre E. Trudeau, who defeated him for the Liberal Party leadership in 1968. The following year, after achieving the rank of senior minister, which was later designated Deputy Prime Minister, Hellyer resigned from the Trudeau cabinet on a question of principle related to housing.

Although Hellyer is best known for the unification of the Canadian Armed Forces and for his 1968 chairmanship of the Task Force on Housing and Urban Development, he has maintained a life-long interest in macroeconomics. Through the years, as a journalist and political commentator, he has continued to fight for economic reforms and has written several books on the subject.

A man of many interests, Hellyer’s ideas are not classroom abstractions. He was born and raised on a farm and his business experience includes manufacturing, retailing, construction, land development, tourism and publishing. He has also been active in community affairs including the arts and studied voice at the Royal Conservatory of Music in Toronto. His multi-faceted career, in addition to a near-lifetime in politics, gives Hellyer a rare perspective on what has gone wrong with world economies.

In recent years he has become interested in the extraterrestrial presence and their superior technology that we have been emulating. In September 2005 he became the first person of cabinet rank in the G8 group of countries to state unequivocally “UFO’s are as real as the airplanes flying overhead.”

ABOUT Light At The End Of The Tunnel by Paul Hellyer

This book reflects the mature judgment of an author with broad experience in and out of public life. It sets out in stark and unvarnished terms most of the world’s major problems. The Human Species is hell bent for extinction unless we change our attitudes and actions with an urgency appropriate to impending disaster.

Paul Hellyer suggests that we have about ten years to wean ourselves from the oil economy and profoundly regrets that the Copenhagen Conference reflected little progress in that direction. The whole atmosphere was one that reminded him of Emperor Nero fiddling while Rome burned. World leaders simply have to do better! The book outlines the three monumental changes required to accommodate the miracle.

First, the book claims that exotic energy sources already exist. They have been developed by the U.S. “shadow government” at the massive underground “black operation” installations in Nevada and Arizona using technology borrowed from visitors from other planets. Yet they remain secret for the alleged benefit of the privileged few.

Second, the money has to be found to subsidize poor nations and facilitate major changes. This can be accomplished by a fundamental re-working of the monetary and banking system. Bank leverages must be dramatically reduced and the percentage of virtual money they create as debt strictly limited so that governments can gain the financial flexibility to finance the transition to sustainability.

Finally it will be necessary for all countries, races, faiths and colors to drop their antagonisms and work together in common purpose to save the heritage they have in common.