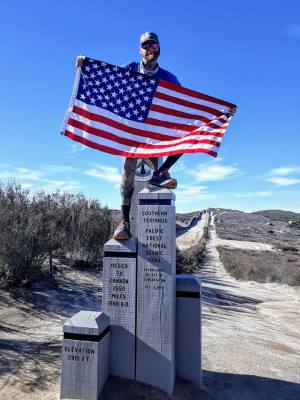 Served in the USAF during the Gulf War period in the early 1990s.

Have 3 beautiful daughters and 3 grandchildren.

Had a great sales career but was suffering from PTSD, depression, anxiety and ADHD.

Got involved with some bad decisions and needed help.

Became homeless in 2014 in Georgia.

Lost everything and then the VA in Wyoming picked up a really broken man, and offered help. I went through the treatment program here twice, and on my 3rd attempt, I decided to do something different. I needed a  change...I wasn’t sure what that meant but I met a counselor that had hiked the Pacific Crest Trail and a month later I was in Washington, about to hike 2,653 miles south to Mexico. Along the journey...the course of my life began to change. I met other veterans on trail who were also not well, and are now life-long friends. After the 2018 hike, I decided to hike it again. Another 2,653 miles...but by then, I knew I needed to help other veterans experience what I just did. So in 2019 I hiked the PCT again. And that's when the calling for suicide prevention became what I'm doing now.