She is also a specialist in Regression Therapy, having been trained for several years in the 1980's by the Association for Past Life Research and Therapies (APRT), which is currently called the International Association for Regression Research and Therapies (IARRT).  For many years she has assisted people by conducting regression therapy: taking them to the original source of their problems and concerns, which sometimes includes revisiting significant events in previous lifetimes.

In 1991 Barbara began working with ET experiencers (people who have encounters with extraterrestrial beings).  She has counseled and conducted regressions with more than 780 of these people, totaling at least 3000 regressions.  Twenty five of these cases are included in her book ALIEN EXPERIENCES, a collaborative work with writer and illustrator Nadine Lalich (2008).  She is a teacher in the UFOlogy Department of the online International Metaphysical University.

A prominent Crop Circle researcher since 1990, Barbara researches and conducts tours to crop circles in England each summer.  She co-authored the book CROP CIRCLES REVEALED: LANGUAGE OF THE LIGHT SYMBOLS with Judith K. Moore  (2001).

She is a highly-sought lecturer on the subject of the Extraterrestrial phenomenon and on the subject of the Crop Circle phenomenon.  She has presented at many national and international conferences, MUFON (Mutual UFO Network) chapters, and other widely known events.  She has been interviewed for numerous films, television specials, radio programs and internet broadcasts. 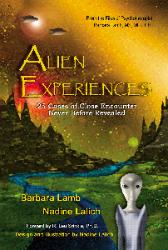