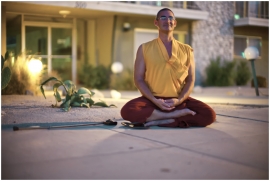 There are many fundamentalist Buddhist/ Taoist monks... but I'm not one of them. Over the years I've replaced my superstition, fundamentalism, and tradition with rationality, liberalism and pragmatism. I've studied, and practiced every school of Buddhism, and many schools of Taoism, Hinduism, Christianity and Judaism. If you're looking for an insightful, playful, and funny guest who can field questions on: Buddhism, Taoism, Meditation, Metaphysics, Healing, Nutrition, Environmental Sustainability, Animal Abolution, Veganism and Progressive Politics... then we should talk.

As a young Jew, Lama was so impressed with George Lucas' depiction of "Holy Man as hero" in "Star Wars" that he spent years becoming a Buddhist/ Taoiost: Monk, Yogi, Healer and Teacher... yet he could relate so closely to Kirk's libido in "Star Trek," that he chose lineages that explore Sexual Tantra.