In the years leading up to the purported end of the Mayan calendar in 2012, many people interested in the spiritual evolution of humanity were engaged in making predictions and prophecies as to what this would mean. Because of the whirlwind of disinformation that clouded this shift, including a large Hollywood catastrophe movie, and the apparent uneventful aftermath of the shift date, many have come to conclude that this calendar lacks relevance for understanding human history and our own time.

Not so, says Dr. Carl Johan Calleman, who has consistently argued based on his research that the Mayan calendar is about the evolution of consciousness-- changing people on the inside -- rather than catastrophes or astronomical events.

Looked upon it from that perspective, the Mayan calendar then remains the most important source for us to grasp the divine time plan for the evolution of humanity. In fact, with the shift in the Mayan calendar in 2011-2012, the transformation of the human mind to unity is only beginning!

In his recent book, The Global Mind and the Rise of Civilization, the first volume in The Paradigm Shift Trilogy, Dr. Calleman describes how deep and fundamental the consequences of the shift in the Mayan calendar has been for our worldview, a shift that is only now beginning to make itself known.

On our planet, this unified plan plays out in a coherent way because everyone is connected to one and the same Global Mind, as evidenced in the book. Going from the unity of pre-history through the separation of civilization, it is now time to return to unity on a higher level.
This knowledge remains largely unknown. Nonetheless, based on the Mayan calendar- and the new insights that have only been possible after the shift -The Global Mind and the Rise of Civilization explains 72 factors -- that previously have not been understood, including where the human mind comes from, what it is and the role it has played in shaping the early civilizations of humanity.

An entirely new theory has thus been developed to explain why, for instance, the Egyptians only a few generations after having left the stone age, were able to build colossal pyramids with an astounding geometric accuracy. In this new theory, all human creativity is generated by a divine mind in which all humans share and which allows us to develop in concert with one another --and for events to happen on schedule. This divine mind is mediated by the Earth and--contrary to what the modern educational system and official science is saying-- the human mind is not located in, nor a product of the brain. This is one of the most significant paradigm shifts for us to ponder.

In a true paradigm shift such as the one that was initiated by the recent shift in the Mayan calendar, almost everyone will have to reconsider their worldviews. No one will be unaffected by a shift in the Global Mind as it occurs, but it may take a shorter or longer time until its consequences are realized.
The benefit of the current shift is the possibility we have now been given to download a completely new mind that has never been accessible before. For those that download this mind, a path returning to unity will open up. This may not happen automatically, but a spiritual awakening (establishing a channel to the personal divine) has now become possible.

As an increasing number of people awaken, says Dr Calleman, we will also be able to create an external world based on unity consciousness, according to the principle of "As Inside-So Outside." Through his extensive scholarship, Dr Calleman has shown that through the connections all humans have with the Global Mind, we, as a species, have gone through an evolution from unity to separation and are now on our way back to unity. This is the true message of the Mayan calendar.

Carl Johan Calleman was born in Stockholm, Sweden in 1950. While as young his main interest was in the humanities and history the first phase of his scientific career was training and practice as a natural scientist in the years 1974-93. He got his Ph.D in Physical Biology under the mentorship of a member of the Nobel Committees and have later also written a number of widely cited articles especially in the fields of Environmental Science, Chemistry and Cancer Research. He was invited to lecture among many other places at the MIT, Cornell, the Chinese Academy of Preventive Medicine and the WHO.

During a backpacking trip to Mexico and Guatemala in 1979 he however became aware of the enormous hidden potential of the Mayan calendar for helping us understand the meaning of the human existence. This insight led to the second phase of his research career, which has been dedicated to understanding the Mayan calendar. It has included writing books on topics ranging from consciousness shifts to a new theory about biological evolution. He has helped the modern-day Mayan elders bring their message to the world. His three books on the topic have been translated to a total of fourteen languages and he has held courses and lectures in some twenty different countries.

The launching of The Paradigm Shift Trilogy in 2014, with The Global Mind and the Rise of Civilization, draws on the experiences from both of the previous phases. This trilogy explores various aspects of the relationship between brain and mind and how this is related to the rise of the early civilizations of our planet. He is convinced that rigorous science is needed to bring about a paradigm shift, which allows humanity to live up to its spiritual destiny. 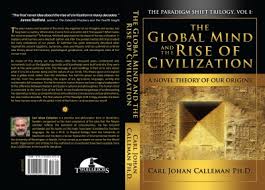