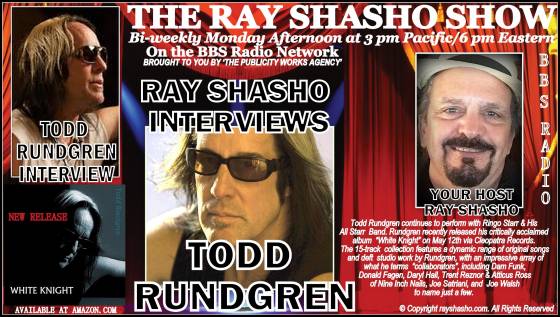 Very special thanks to Paul Maloney of Panacea Entertainment for arranging this interview with Todd Rundgren, also Doug & Don Newsom with BBS Radio for making it all happen every show!  Join me bi-weekly Monday’s at 3pm pacific/6pm Eastern on The Ray Shasho Show. If you have comments or suggestions or would like to be a guest on The Ray Shasho Show call 941-877-1552 or email us at ray@publicityworksagency.com. 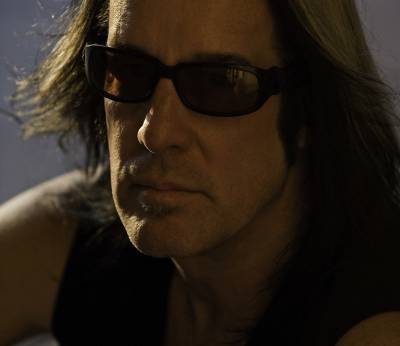 TODD RUNDGREN was inspired by virtuoso trendsetters Eric Clapton, Jeff Beck, Michael Bloomfield and Harvey Mandel. The Philadelphia native directed his creativities into launching the bands ‘Money’ and ‘Woody’s Truck Stop’ achieving regional success. Rundgren then organized the nationally recognized Nazz in 1967. Initially formed as a psychedelic-blues rock band it discovered an array of eclectic musical styles. Todd Rundgren’s huge hit single “Hello It’s Me” was originally recorded with the Nazz in 1968. The Nazz became successful with the psychedelic tune “Open My Eyes” while opening shows for Jim Morrison and The Doors. After Nazz broke up Rundgren recorded several solo albums under the name Runt and Todd scored commercially with his first big solo hit “We Gotta Get You a Woman” in 1971.

The genius of Rundgren became even clearer with the release of his certified gold double album masterpiece Something/Anything? The album spawned the huge Top 40 singles “I Saw The Light” (#16 Billboard) and Nazz original composition “Hello It’s Me” (#5 Billboard).

Utopia was formed in 1973 but the band’s foundation was established in 1974. Rundgren magnified his musical inventiveness by fusing progressive, pop, psychedelic and hard rock into euphonious orchestrations

Utopia’s signature anthem “Just One Victory” from the 1973 release A Wizard, A True Star is usually played at the end of every concert. Rundgren’s penned “Love Is The Answer” from Utopia’s Oops! Wrong Planet album in 1977 became a huge hit for England Dan & John Ford Coley in 1979 reaching number #10 on the Billboard Hot 100 charts.

Todd Rundgren maintained a highly successful solo career while recording and performing with Utopia. In 1978 Todd Rundgren released the sentimental “Can We Still Be Friends” becoming #29 on Billboard’s Hot 100.

Throughout the 70’s and 80’s Todd Rundgren established himself as an industrious musical genius in the recording studio producing and engineering for legendary artists including classic albums Straight Up by Badfinger, Stage Fright by The Band, The New York Dolls, We’re An American Band and Shinin’ On by Grand Funk Railroad, Bat Out Of Hell by Meatloaf and Skylarking by XTC Rundgren also contributed his extraordinary skills as a first rate musician and composer to a legion of legendary artists.

Utopia’s progressive rock improvisations landed the group cult status throughout its tenure. Utopia split up in 1986 and reunited briefly in 1992 and again in 2011.

In 1983 Todd Rundgren wrote “Bang The Drum All Day” All the instruments on the song were performed by Rundgren. The tune is widely heard at professional sporting events around the country and used on TV commercials and movie trailers.

Todd Rundgren continues to perform with Ringo Starr & His All Starr Band.

The album is available to purchase now at amazon.com. 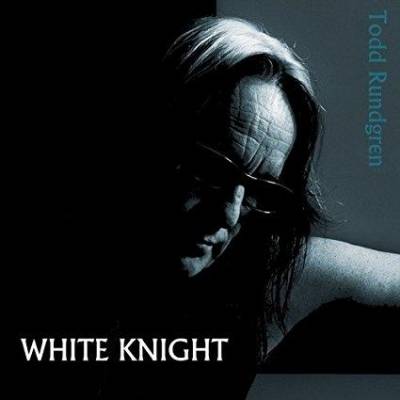