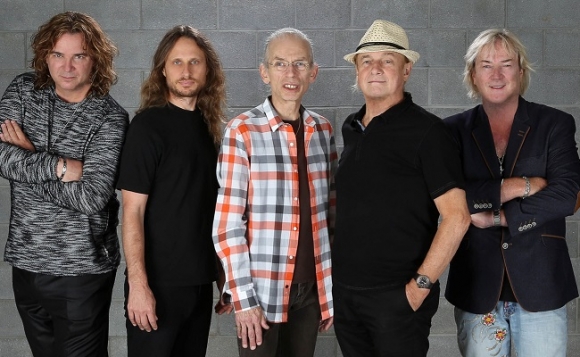 Today we welcome Progressive Rock multi-instrumentalist/singer/ songwriter/ producer/ engineer/ pioneer/ BILLY SHERWOOD who is the current bass player in the band YES and will be touring with the band throughout 2015. Billy Sherwood was a key part of the line-ups which created the YES albums OPEN YOUR EYES, THE LADDER and was also part of the TALK tour. He recently mixed the band’s HEAVEN AND EARTH album and 2 subsequent DVDs.

Billy is also the founder of the progressive rock band CIRCA with original Yes keyboardist Tony Kaye. And So On is the band’s third release and greatest innovative achievement to date.

Billy Sherwood was born in Las Vegas Nevada and into a showbiz family of talented musicians. His father was big band leader/musician/actor Bobby Sherwood -his mother Phyllis was a singer and a drummer and his brother Michael a singer and keyboardist. Now if that hadn’t convinced anyone that they were indeed a showbiz family how about the fact that his Godfather was legendary comedian Milton Berle.

DIVIDED BY ONE …is Billy Sherwood’s latest solo project and Sherwood’s seventh solo album …DIVIDED BY ONE and COLLECTION the ideal introduction to Billy Sherwood’s solo career which includes TWO EXCLUSIVE TRACKS … is available Now ahead of a mainstream release later this month. Orders through the website are being sent out NOW! These latest CD’s will be eagerly greeted by YES fans especially in light on Sherwood’s recent return to the band in mid-2015.

On November 6, 2015, Frontiers Music Srl will release Billy Sherwood's latest, a concept album called CITIZEN.
Billy Sherwood created this concept album based on a lost soul that is reincarnated into various periods of history. "I was inspired by the notion that General Patton believed he was reincarnated on various battlefields through time; I wanted to take that concept even further." As the songwriter/producer, Billy placed the citizen character into significant moments of history.
The lead off track is called “The Citizen" which sets the stage for what's to come on the recording. “The Citizen” features Billy's longtime friends and members of the legendary Progressive Rock band Yes: bassist Chris Squire and former Yes keyboardist Tony Kaye.
Billy has written all the music and production is now in full swing. Guest artists joining Billy in this journey through music, time and space include: