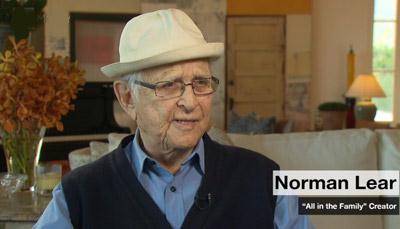 Norman Lear was born in New Haven, Connecticut on July 27, 1922. He dropped out of Emerson College to join the U.S. Army Air Force during World War II. He left the Army in 1945 and began writing comedy, which eventually transformed into screenwriting and producing for television and films. His best known projects include the TV shows All in the Family, The Jeffersons, Maude and Good Times.

Television and film writer and producer. Born Norman Milton Lear on July 27, 1922. Lear grew up in a Jewish family in New Haven, Connecticut where his parents, Herman and Jeanette Lear, worked in sales. When Lear was only 9 years old, his father went to prison to serve a three-year sentence for fraud. With his father in jail, Lear turned to his uncle Jack and his grandfather Shya as role models. His grandfather wrote frequent letters to the president on the various political issues of the day. Lear later said his grandfather's political involvement taught him a lesson he never forgot: "that a citizen can matter." Nevertheless, Lear never imagined himself growing up to be a rich and famous celebrity. "All I wanted was to grow up to be a guy who could flip a quarter to a nephew," he once said.

Lear attended Emerson College in Boston, but dropped out in 1942 to join the United States Army Air Forces. He served as a radio operator and gunner during World War II, flying 52 combat missions in the Mediterranean Theater and earning the Air Medal with four oak leaf clusters. Lear left the military in 1945, and worked for four years in public relations before embarking on a career as a freelance comedy writer.

In 1950, Norman Lear teamed up with Ed Simmons to write The Ford Star Review, a musical comedy variety show that aired for one year on NBC. Although the show's run was brief, Lear and Simmons impressed comedian Jerry Lewis, who hired them to write for the Colgate Comedy Hour, where they worked until 1953. In 1958, Lear moved from writing to production, joining with director Bud Yorkin to found Tandem Productions. With Lear writing and producing, the pair produced numerous feature films, including Divorce American Style (1967), which earned Lear an Academy Award nomination in 1967.

All in the Family

In 1970, Lear got the idea to revamp the British sitcom Till Death Do Us Part to fit into an American context. Set in Queens, New York, All in the Family aired on CBS from 1971 to 1983 (renamed Archie Bunker's Place in 1979) and won four consecutive Emmy Awards for Outstanding Comedy Series. All in the Family was groundbreaking in many respects, helping to usher in a new era of television programs that tackled controversial and socially relevant subject matter. The show, which centered around the bigoted character Archie Bunker, examined the issues of race, sexuality, and social inequality through the lens of comedy, breaking longstanding television taboos against profanity, racial slurs, and toilet humor.

In addition to All in the Family, Lear wrote and produced a host of other controversial shows that dealt with pressing social issues. In 1972, he introduced Maude on CBS, whose caustic, liberal title character provided a foil to the conservative Archie Bunker. Lear also brought black families into starring roles on primetime television with Good Times (1974-1979) and The Jeffersons (1975-1985). While Lear's shows were often criticized for their sharp political bent, he vociferously defended his right to incorporate his personal views into his writing. "Why wouldn't I have ideas and thoughts," he said, "and why wouldn't my work reflect those ideas?"

In order to have a more direct impact on social change, in 1981 Lear decided to leave the world of television for political activism. In that year, he founded People for the American Way, a nonprofit organization dedicated to protecting First Amendment rights, strengthening public education, and promoting electoral and immigration reform. In 2000, Lear founded the Norman Lear Center at USC to support research investigating the intersection of entertainment and society. Four years later, he founded Declare Yourself, a nonpartisan youth voter registration initiative. For his work in both television and political activism, President Bill Clinton presented Lear with the National Medal of Arts in 1999, stating that "Norman Lear has held up a mirror to American society and changed the way we look at it."

Lear lives in Los Angeles, California with his third wife Lyn Davis Lear, with the two having married in 1987. He has six children and four grandchildren. Together the couple continues to participate in political causes; in 2009, they founded Born Again American, a group committed to reviving informed citizenship. And in October 2014, at the age of 92, he published his critically-acclaimed autobiography Even This I Get to Experience.

Asked by an interviewer to sum up his influence on American television and society, Lear recalled one night when he was riding in an airplane. "I remember looking down and thinking, hey, it's just possible, wherever I see a light, I've helped to somebody laugh." 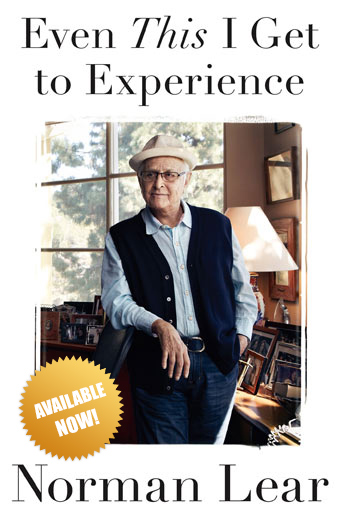