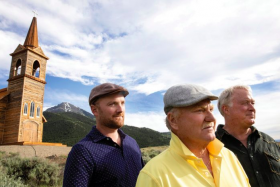 kathfleisch@gmail.com
Your Pitch
Were you a fan of Yellowstone for its jaw dropping scenes and backdrops? Enter the real deal Yellowstone Film Ranch, a new production studio located in the heart of Paradise Valley, Montana, with sets along the stunning mountain for a dramatic western, drawing in all types of film, television, and commercial productions due to the new Montana tax incentives. The first film produced at the studio, 'Murder At Yellowstone City,' will open in theaters and OnDemand on June 24.

Richard Gray, Carter Boehm, Colin Davis are the founder behind the company who also pushed through the Montana Economic Industry Advancement Act, or MEDIA Act, providing huge tax breaks to productions who hire local Montanans to work on films.

Gray says, “Many stories in film and television ‘set’ in Montana were shot in Canada, Utah, or New Mexico. With the new wave of ‘westerns’, there were enough productions to justify another location option. Now, more filmmakers are looking at Montana as a place to bring their productions, in large part due to the Montana Economic Industry Advancement Act, or MEDIA Act, passed into law last year.”

The new bill helped generate almost $48 million dollars into the state, according to a recent study by the Montana Department of Commerce. The Ranch was completed in June 2020, with a wave of westerns shot there in 2021, including Gray's first western "Murder at Emigrant Gulch," and Nicholas Cage's "The Old Way.”

Located behind the Chico Hot Springs Resort near Livingston, Yellowstone is a passion project for partners Colin Davis, Richard Gray and Carter Boehm due to their love of movies that got them thinking – why aren’t more films being made in Montana? The three partners helped rally support for the passage of the MEDIA Act to not only lure Hollywood to Montana, but to generate money into the local economy. On top of that, Montana has no sales tax.

They designed a ‘film-friendly’ town, with the Chico Hot Springs Resort just a short walk from the set. The western backlot is styled after a late 1800s gold rush town that uses five fully functional interior/exterior sets with some support buildings and façades to create the look of 28 unique structures set amongst rolling hills with a backdrop of glacier mountain peaks. Additional sets include a native camp, farmhouse, and multiple cabins.

In April 2020, Robert the Bruce, which Gray produced alongside Carter Boehm, was the number one independent film on iTunes. His latest feature, Murder at Emigrant Gulch, is a western murder mystery to be released on June 24, 2022. It was the first feature shot at Yellowstone Film Ranch. Gray has long been passionate about westerns, and in 2019 he moved his young family to Livingston, Montana, to commence construction on his most meaningful professional feat. The building of Yellowstone Film Ranch.