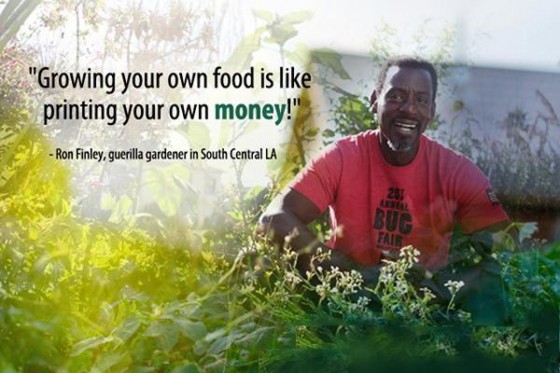 Meet Ron Finley, a man who will not sit still and watch a problem take root. Having grown up in the South Los Angeles food prison, Ron is familiar with the area’s lack of fresh produce. He knew what it’s like to drive 45 minutes just to get a fresh tomato.

In 2010, he set out to fix the problem. Outside his front door, that is. Ron planted vegetables in the curbside dirt strip next to his home. And quietly, carefully, tenderly started a revolution. I wanted a carrot without toxic ingredients I didn’t know how to spell, says Ron.

His was an exceptionally creative, cost-effective and simple solution; however, it was also an act of spirited rebellion that led to a run-in with the authorities.

The City of Los Angeles owns the “parkways” the neglected dirt areas next to roads where Ron was planting. He was cited for gardening without a permit. This slap on the wrist did little to dissuade his green thumb. So Ron fought back. Hard. He started a petition with fellow green activists, demanding the right to garden and grow food in his neighborhood and then, the city backed off.

This caught the eyes of creative leaders and media voices that lauded his courageous act of ebullient defiance. Ron has continued to share his story and vision with the world, giving a TED talk and planning many exciting ways to continue his involvement in mitigating Los Angeles food prisons.

His dreams have been reshaped into a thriving garden of pumpkins, peppers, sunflowers, kale and corn. But more than being a gangsta gardener, Ron is a community leader.

Determined to change South Los Angeles from food desert to food forest, he wants his actions to be educational, inspiring, and nutritious. He wants kids to grow up with the option of healthy food, instead of fried, fattening staples. He wants to sweep up and transform his street, his hood, the city of LA and communities everywhere.

Besides his community leadership helping people to understand and become involved with gardening leading to better nutrition, Ron owns his own clothing business called "Dropdead Collexion".  He has designed clothes for NBA players, Saks Fifth Avenue and Marcus Neiman among many others.  He has also been featured on a number of TV and radio shows, a speaker at events, as well as profiled in publications like Reader's Digest, Millenial Magazine, and Aquaponics.  Ron is also a recepient of the “Natural American Heroes Award” from Natural News.

ABOUT THE 'RON FINLEY PROJECT'...

Ron is realizing his vision for community gardening and rejuvenation. Let’s grow this seed of urban gangsta gardening into a school of nourishment and change. Help spread his dream of edible gardens, one city at a time.

It’s time for Americans to learn to transform food deserts to food forests. Help them learn to regenerate their lands into creative business models. Let’s make Ron’s philosophy mushroom across the country, and the world.

In part of this effort, Ron is planning to build an urban garden in South Central LA that will serve as an example of a well-balanced, fruit-and-veggie oasis  called “HQ”.

Inspired by the idea of turning unused space such as parkways and vacant lots into fruitful endeavors, this garden and gathering place will be a community hub, where people learn about nutrition and join together to plant, work and unwind.

HQ will create a myriad of jobs for local residents, and this plot of land will be a self-sufficient ecosystem of gardening, education, cooking, business learning and management. The community will get their hands dirty together, shovel together, work together and be healthy together. 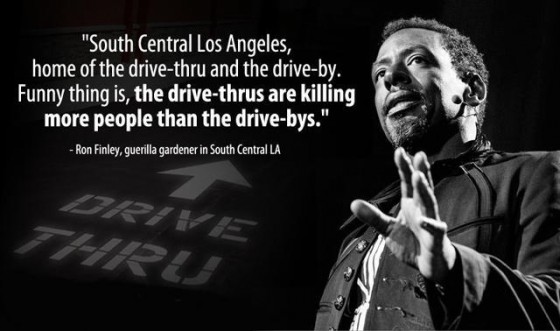