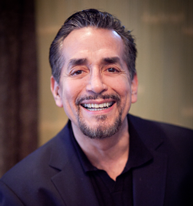 Richard “Anton” Diaz, born in New York City, raised in Stamford, Connecticut, entered his 1st year in college as a scholarship student at Fairfield University as a math and science major training toward becoming a mechanical engineer. His focus shifted, however, to the studies in human thought, and he began to study philosophy and psychology. It was during these studies that he began to embrace the Tao as his personal philosophy.

Anton transferred to Antioch College, then, one the most progressive liberal colleges in America founded by Horace Mann. His interests shifted once again, this time to the arts and he began pursuing a career in Music and Dance. After graduating Antioch, he embarked upon a professional dance career that would last 20 years. As a professional competitive ballroom dancer  he won a World title in 1989 and afterwards twice represented the United States in world championships. During his training as a dancer he was highly impacted be  the Alexander Technique where he began to appreciate the delicate connection between mind and body.

In 1992, he met Master Mantak Chia, and began to deepen his studies in Taoism, and for the first time, was introduced to Taoist sexual cultivation practices. In 1997, he retired from dancing and began teaching Taoist practices full time. In 1999, he founded Sexy Spirits in New York City, as an educational center where sexuality and spirituality could be taught as an integrated part of our human nature.

Today, Sexy Spirits continues as an educational center with classes, lectures, and workshops, both live and online, that are taught in the United States. Richard “Anton” Diaz, is currently authoring 2 books, and teaching courses and trainings he has created. They include: Tantra Tango, Mastering Your Orgasm,  Taontric Massage, and Orgasmic Providers.

From founder…………
In 1999, I had just completed my associate instructor training in the Healing Tao practices under Master Mantak Chia, and decided to create a learning center in New York City that would offer a practical and systematic method of integrating health, sex, and longevity through the Taoists principles that I had learned and began to apply in my life. I was especially enthusiastic about teaching men the sexual cultivation practices that had changed my life. What I had learned had not only increased by state of personal health and well being but also greatly enhanced my understanding and ability in my relationships with the women in my life. You might say I was no longer a slave to my sexual drives but now the master of them. My new way of understanding and experiencing my sexual energy gave me an insight in understanding how love, passion, and sex, could now work together in creating harmonious relationships as well as strong loving community.

Sexual energy is perhaps the most powerful driving force in our lives. Our sexual energy can provide us with more health, happiness, and well being but can also be our greatest source of distraction, frustration, and confusion. Through sex we can easily create new life or just as easily upset or destroy existing ones. Understanding and mastering our sexual energy will greatly determine whether or not we create the life we desire.

Our sex drive is motivated by two strong and not necessarily dependent urges; the urge to create children and have family, and the urge to experience sexual energy as pleasure. It would seem that mother nature for some reason provided us with far more sexual energy than was actually required to continue our species.

Our current culture partakes in sexual energy far more for the experience of pleasure than it does for making babies. This is actually a better survival choice for our species over-populated would be a great threat to our survival potential. As we learn more and more how to economically populate and successfully prolong life on this planet, the necessity to understand our use of sexual energy as pleasure becomes critical. Even the celebate must manage their sexual drives.

Though current western society on the whole has given great latitude for sexual expression as a function of pleasure independent of procreation, western religious ideologies, since their very inception, have pretty much continued to disassociate sexual energy with spiritual development. In contrast, early eastern religions, the major ones being Taoism that originated in China and Tantra in India, embraced the cultivation and integration of sexual energy as vital to spiritual growth. Unfortunately, these teachings have not so easily been accepted and/or appreciated by the western mind. Teachings in Tantra's goddess oriented philosophy have appealed much more easily to the "feminine" intellect while teachings in the monk oriented Taoist approach with it's pragmatic, logical, and often times clinical presentation to the "masculine".

But what if these teachings could be presented to the western mind in such a way that would be instructive, illuminating, and equally appealing to men and woman alike? What if we could come to our own understanding of sexual energy cultivation that would allow us to honor our sexual urges. What if we could consciously cultivate our sexual energy into a regular practice, as we currently do with diet and exercise, that would increase our physical, mental, and emotional well-being?

Well this is my mission with Sexy Spirits! To empower men and women to cultivate and refine their sexual energy in a way that will encourage and support healthy bodies, clear minds, and harmonious relationships. I invite you to begin by first embracing the Sexy Spirit that lives in every cell of your body. That sexy spirit is YOU and was born the very instant your father’s seed found home in your mother’s womb.