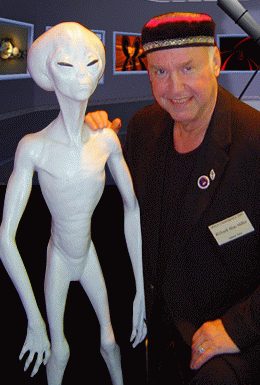 Richard Alan Miller reveals a wealth and depth of knowledge and experience in Alternative Agriculture, New Age Physics, and Metaphysics.  Miller began working in the "X-Files" world in the 60s and has amazing experiences and conclusions to share.

An original team-member, "man-in-black," Miller's research in the field of Parapsychology & Paraphysics began as a graduate physicist working 11 years with Navy Intel.

Offering fresh perspectives on Metaphysical traditions his books, papers & articles include The Modern Alchemist; ESP Induction Through Forms of Self-Hypnosis, and "A Holographic Concept of Reality."

Richard Alan Miller has been at the forefront of many fields during his long and varied career. A solid-state physicist with graduate work at MIT, Miller was involved in groundbreaking work for cloaked agencies in the late '60s and '70s. A colleague of Dr. Stanley Krippner, Miller co-authored in 1973 the paper, The Holographic Concept of Reality - a document whose implications for psychoenergetic systems are only now beginning to be realized.

Like so many of the idealists of his era, Miller became quickly disillusioned with the severe ethical compromises forced on him by what he recognized as corporate manipulation. After a brief stint as an engineer at Boeing, Miller left the corporate world in disgust and entered the more spiritually satisfying world of the occult. He opened Beltane Books in Seattle and swiftly became " the Herman Slater of the West Coast." At this time he penned several works including his classic " The Magical and Ritual Use of Herbs."

Miller also co-authored, with his wife Iona, THE MODERN ALCHEMIST, hailed by Stanley Krippner as the most "illuminating" study of Alchemy since Carl Jung. Before its publication, Miller had used an electronic form of the book as teaching material for his on-line course in Metaphysics, taught on America Online.