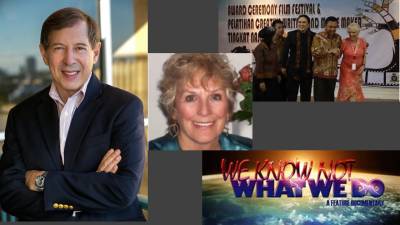 Mitch Russo: If you sell or license software, marketing automation, coaching or training programs or have any kind of "transformational" process, Mitch can show you how he creates multi-million-dollar divisions for his clients. His #1 Amazon Best Seller: The Invisible Organization, blueprints the entire process of going Virtual and the benefits of having a virtual company. His expertise ranges from creating virtual organizations and coaching networks to building, growing, running, selling and buying technology companies for the last 3 decades. He was the CEO and President of Business Breakthroughs with Tony Robbins.

Gaylynn Baker is an award-winning writer/director of 25 years. Recently she released her third documentary: We Know Not What We Do, which gained international attention with world-wide distribution by Silicon Beach.  Gaylynn was a keynote speaker for World Film and International Film Festival in Jakarta, and is the writer of the original screenplay Gifts of Gratitude and her second book, We Know Not What We Do, is a companion book to the documentary film. Her other documentaries won awards: THE TRAIL OF PAINTED PONIES, narrated by Ali MacGraw, also shown on PBS, and WHEN BUFFALO ROAM, narrated by Peter Coyote.