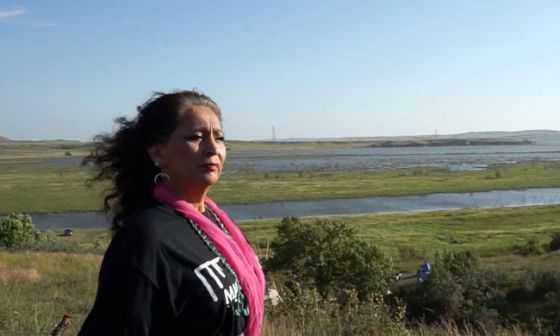 Allard is an enrolled member of, and former historical preservation officer for, the Standing Rock Sioux Tribe. Her people are Inhunktonwan from the Jamestown Valley, Hunkpapa and Blackfoot.

While there are now multiple water protector camps at the Standing Rock, Sacred Stone, the first camp, is on Allard's private property. Out of this grew the global Dakota Access Pipeline protests. By December 2016, more than 10,000 indigenous people and environmental activists were camping in the area. This movement has become the largest intertribal alliance on the American continent in centuries, and possibly ever, with over 200 tribal nations represented.

Sacred Stone Camp founder Ladonna Bravebull Allard addressed the UN on behalf of the Standing Rock Sioux Nation to request assistance in the struggle to protect Indigenous water and sacred sites from the Dakota Access Pipeline...

I greet you with a good heart today. I am Ta Maka Waste Win, an enrolled member of the Standing Rock Sioux Tribe I am speaking regarding the participation of the over 300 million Indigenous Peoples of Unci Maka Mother Earth. Within the United Nations system, we the Indigenous peoples request that our participation be granted at the highest possible level and that our representatives be legitimate and elected by Indigenous Nations and organizations in each region. This will secure that our participation and contributions on issues that affect us are addressed in a legitimate manner. Lack of this legitimate representation and contributions on issues that affect us are resulting in violations of our equal and inalienable rights as members of the human family. As such is the current and urgent situation of the Standing Rock Sioux Tribe, my home, where the Dakota Access Pipeline has blatantly violated the Universal Declaration of Human Rights, the United Nations Declaration on the rights of Indigenous Peoples, ILO 169, the Laramie Treaty of 1868, unresolved Ihunktonwana Land Claim Docket 74A and most importantly our Mother Earth.

The organization hereby invokes the Universal Declaration of Human Rights, the United Nations Declaration on the rights of Indigenous Peoples, ILO 169 to be enforced and brought to life to put an immediate stop to the Dakota Access Pipeline. We request that an observer and media team be sent immediately and permanently to Standing Rock until this issue is resolved to protect the water. This situation with Dakota Access has been going on for 6 months now. It has endured Spring, Summer, Fall and heads into Winter as we protect and defend our right to water. We demand immediate assistance and protection for our Lakota, Dakota, and Nakota sisters and brothers. Today we are here to formally denounce terrorism from transnationals agaisnt Indigenous Peoples of Mother Earth, as such is our situation in Standing Rock and also the urgent situation of our Indigenous sisters and brothers in the Amazon and many other parts of the world.

The organization remains committed to solving the challenges faced by our generation which is to protect life and clean water for the future generations and so that all that exists can continue to exist. The Indigenous Traditional Knowledge is the only path remaining to heal the unsustainable pattern of production and consumption that is destroying our lives and the world around us. Agenda 2030, without our legitimate representatives and inclusion of Indigenous Peoples Traditional Knowledge will fail.  Our knowledge can help heal Mother Earth. Without it, great and irreparable damage will lead us to destruction. We must unite to protect the Water and our Mother Earth. We, the Indigenous Peoples of Mother Earth walk to the future in the footprints of our ancestors

This Spirit Camp is called Iŋyaŋ Wakháŋagapi Othí, translated as Sacred Rock, the original name of the Cannonball area. The Spirit Camp is dedicated to stopping and raising awareness the Dakota Access pipeline, the dangers associated with pipeline spills and the necessity to protect the water resources of the Missouri river. We reject the appropriation of the name “Dakota” in a project that is in violation of aboriginal and treaty lands. The word Dakota means “the People” in the Dakota/Lakota/Nakota language and was never intended to be used in a project which violates traditional ceremonial areas.

Chante tin’sa kinanzi Po is a grassroots group with the following mission statement: “They claim this mother of ours, the Earth, for their own use, and fence their neighbors away from her, and deface her with their buildings and their refuse.” – Chief Sitting Bull. His way of life is our way of life–standing in opposition to the Dakota Access Pipeline is our duty. Group: Chante tin’sa kinanzi Po translates as People, Stand with a Strong Heart!

The Dakota Access threatens everything from farming and drinking water to entire ecosystems, wildlife and food sources surrounding the Missouri. The nesting of bald eagles and piping plovers as well as the quality of wild rice and medicinal plants like sweet grass are just a few of the species at stake here. We ask that everyone stands with us against this threat to our health, our culture, and our sovereignty. We ask that everyone who live on or near the Missouri River and its tributaries, everyone who farms or ranches in the local area, and everyone who cares about clean air and clean drinking water stand with us against the Dakota Access Pipeline!

We will not allow Dakota Access to trespass on our treaty territory and destroy our medicines and our culture. From the horse ride that established the Camp of the Sacred Stones, to the 500-mile Run for Our Lives relay that delivered our recommendations to the Army Corps of Engineers, with the hundreds of community members who met with Army Corps Colonel Henderson on April 29, and the ongoing vigilance of our prayers, we are committed to stopping the Dakota Access Pipeline.