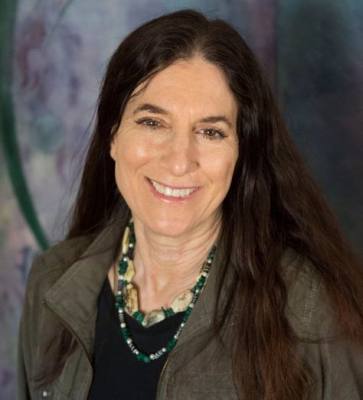 Audri Phillips, director/ 3D animator, content creator, immersive media specialist. She is based out of Los Angeles with a wide range of experience that includes over 25 years working in the visual effects/entertainment industry in studios such as Sony, Rhythm and Hues, Digital Domain, Disney and Dream Works feature animation. Starting out as a painter she was quickly drawn to time-based art and visual poetry. An interest in science and technology has always played a part in her work. She is a pioneer of using cutting edge technology, including currently in immersive media performances, and full dome, VR/AR.

Currently a member of the Intel Innovators Group, she writes online articles for Intel, is a member of ADN (Autodesk Developers Network) a resident artist at Vortex Immersion, and a consultant/researcher for a technology company, Stratus Systems. She is the co- founder and director of Robot Prayers an immersive transmedia project which explores AI and our hybrid identities in a world where man and machine are melding.

Over the past 6 years she directed/animated/designed over 6 full dome shows, one with composer, musician Steve Roach, created animations for dance companies as well as a number of cinematic and interactive VR pieces using Autodesk Maya, Touch Designer and Unreal Engine.

One of the VR pieces, “Migrations” is on the Samsung Indie channel. All of the full dome pieces as well as her animations and paintings have been shown in festivals and conferences around the world.

She has been an adjunct professor at a number of Universities around Los Angeles. BFA from Carnegie Mellon University