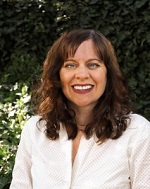 Before I introduce my guest today I want to explain why a discussion of women suffragists is important to holistic health. I have always envisioned holistic health as encompassing physical, mental and spiritual health, the environment, relationships and political action because all influence health.  The work of women suffragists and activists are a part of political action that focus on change to benefit the health and activities of all people in an democratic society.

April Young Bennett began studying the lives of suffragists to inform her own activism. As Communications Director for Voices for Utah Children (utahchildren.org), she worked within nationwide networks of advocates for changes to state and federal policies affecting children and parents such as pay equity, healthcare, education and juvenile justice. She was a founding organizer and spokesperson for the activist group Ordain Women (ordainwomen.org), which has been featured in respected news outlets such as the New York Times and the Washington Post. Ordain Women collaborates with the Women’s Ordination Conference (Catholic), Ordain Women Now (Lutheran), Women of the Wall (Jewish), the Parliament of World Religions Women’s Task Force and other networks of religious feminists.

April produces and hosts the Religious Feminism Podcast https://www.the-exponent.com/category/podcast/), which provides a forum for feminists across a variety of faith communities and secular feminist organizations to learn about each other and work together toward common goals. She blogs about Mormon feminism at the-exponent.com, which averages 40,000 unique visitors per month.
As April has advocated for gender equity, she has noticed parallels between her modern challenges and those experienced by our first wave feminist forebears. When she marched with hundreds of women to a male-only religious meeting, the women were barred from entrance but allowed to listen over the internet, much in the same way Lucretia Mott and Elizabeth Cady Stanton were barred from the World Anti-Slavery Convention in 1840 but allowed to listen from the balcony, behind a bar and a curtain. On another occasion, she was among many women of her faith who demonstrated their desire for gender equity by wearing pants to church instead of traditional dresses. At least one male church member was so peeved that he threatened to shoot any woman who showed up at church in pants. April was reminded of our suffragist foremothers, who received a similarly visceral reaction when they wore bloomers in the 1850s. She witnessed male religious leaders denouncing outspoken women using many of the same tactics employed against women such as Angelina and Sarah Grimké, Lucy Stone and Sojourner Truth.

April began to wonder if her activist community wasn’t recreating the wheel with their frantic brainstorming—the world had not changed as much as they had thought, and certainly some of the feminists who came before them had already addressed some of the problems they were facing. What could she learn from our foremothers? April wanted to read something about this era—one book, preferably, because she was busy—but broad enough to impart the wisdom of activists from a variety of racial and socioeconomic backgrounds. She didn’t want it to be limited to the most famous people because in her experience, movements are built by communities of rank-and-file workers, not solitary heroes. And while history can be fascinating, April was in a hurry—she had urgent causes to support—so she wanted something that focused on what was most pertinent to her modern concerns, like collaborative relationships, strategies and activism, but that would be lighter on dates, meeting minutes and genealogy charts.
April didn’t find that book. So she read everything: memoirs, biographies, history books, archived letters and diaries, even those boring meeting minutes. She asked suffragists her questions and they answered her, but they didn’t all agree with each other; they were a diverse, opinionated bunch. In their lives, April saw much to emulate and some pitfalls to avoid. The people who came before us were as deeply flawed as they were passionate and inspiring. Now, she’s written the book that she wanted to read back when she started this journey: Ask a Suffragist: Stories and Wisdom from America’s First Feminists.
Learn more about April Young Bennett at https://aprilyoungb.com 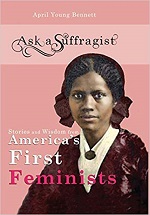