Chuck and Julie Show with Chuck Bonniwell and Julie Hayden 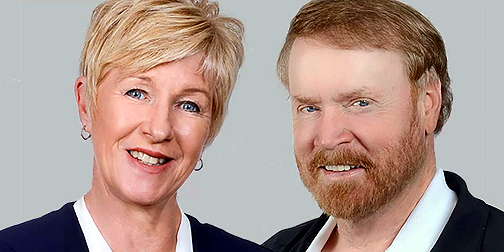 Chuck Bonniwell and Julie Hayden are longtime radio hosts and political analysts. They bring a wealth of experience on political issues and current events on a local, national and international level.

Chuck is a former highly successful trial attorney and currently is a publisher and columnist.

Chuck Bonniwell is a former highly successful trial attorney who now owns and publishes the Glendale Cherry Creek Chronicle, the most successful local paper in Colorado with a monthly readership of a quarter-million people.

Chuck Bonniwell and his wife, Julie Hayden previously co-hosted the popular Chuck and Julie Show on AM radio in Denver for more than 10 years and are excited to join the communication world of podcasts.

They bring a wealth of experience on political issues, both local and national and are strong advocates for grass roots issues and neighborhoods.

Chuck has worked with local government as a Senior Advisor to the historic mining town of Central City, Colorado and as the official Historian for the City of Glendale, Colorado. He’s a founding member of the Greater Glendale Chamber of Commerce.

He’s received critical acclaim for his book “The History of the Denver Country Club: 1887-2006”.

In his spare time Chuck seeks the perfect golf swing.

Julie Hayden has been a leading and trusted voice in Colorado broadcasting for more than 30 years. She and her husband Chuck Bonniwell have previously co-hosted daily and weekend talk radio shows for more than 10 years and are excited to be joining the communication world of podcasts.

They bring a wealth of experience on political, social and cultural issues and advocate for grass roots politics and neighborhoods. They are known for telling #TheTruthStraightUp.

Julie has received numerous awards for radio and television broadcast excellence including 3 Emmy awards for her investigative reporting. She started her radio career at KLMO radio in Longmont where she worked as a news reporter and also got her first taste of talk radio, as she occasionally filled in on a cooking talk show. She moved on to radio stations in Denver and landed her first television reporting job at KRDO-TV in Colorado Springs. She quickly moved up the career ladder and back to Denver working for KMGH-TV and KDVR Fox-31 TV. Julie worked as a television reporter in Denver for 25 years with a focus on courts, crime and cops. She covered major stories like the JonBenet Ramsey murder case, the first school shooting at Columbine High School and has interviewed more serial killers than any other reporter she knows.

She retired from the TV world to work at the Glendale Cherry Creek Chronicle, a highly successful local newspaper owned by her husband, Chuck.

Julie was born in Des Moines, Iowa and raised in Woodstock, Illinois. It’s a Chicago suburb, mostly rural. In fact, her first job was detasseling corn. After 12 years of Catholic grade school and high school she attended Iowa State University and graduated with honors with a degree in Journalism.

She moved to Colorado after graduation, fell in love with Denver and the Rocky Mountain west and has called Colorado home ever since.

Julie counts her blessings every day. She and Chuck have a grown daughter, Jennifer Jordon who runs her own successful video production company and an 8 year old son, Rev who loves school and any and all sports. Their Pomeranian, Tiger runs the household.