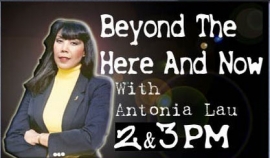 With over 40yrs of deep Meticulous Research on the current Major Earth Changes, Scientifically,Metaphysically and Spiritually, ALL events have been confirmed, come to pass, or are currently in Process. Everything on our planet happens in ALL 3 ways. I share exactly WHAT we can expect and just HOW to PROPERLY prepare for the Current Earth Pole Shift, Now in process, with rapidly approaching catastrophic events. If the World Governments and the Elite are preparing...don't you think WE Should?? Learn How.

Antonia Lau has spent her entire lifetime, in the service of others, through intense Metaphysical & Spiritual Study, Practice and Research. Everything she has done in her meticulous research, spanning over 40 years on this very subject, has all been in preparation for this specific period in time. Antonia has used her vast expertise to counsel, educate, and instruct, in over 50,000 Readings. She has clients Worldwide, ranging from top Celebrities, Doctors, Lawyers, and high-powered Business Executives to the average person, from every walk of Life. Born with the ‘Gift of Prophecy’, with an extremely high level of accuracy, a high repeat clientele, and high referral base; she has used her Prophetic Gift to successfully improve the quality of life, of everyone she touches. Her warm, patient and charming personality, coupled with this marvelous gift, has given her a stellar reputation. Antonia has been a successful radio and TV talk show host, since the 1980s. Her first radio show, on KFOX 92.5 FM, in Los Angeles, was called “All That I Am”, which featured Celebrity and Expert guests for interviews on Spiritual/Metaphysical topics. The radio show was subsequently reformatted as a Television Talk Show for syndication, titled, ‘A Road Less Traveled’. Antonia continues to Host her current Award Winning Radio Talk Show, called ‘BEYOND THE HERE & NOW with ANTONIA LAU’, which garners a loyal audience of over 200,000 listeners per week, has also been reformatted into a syndicated TV show, for distribution and syndication. Antonia’s show can be heard at www.Indie100.com, (the #1 Digital Radio Station over IP, out of Burbank, CA, with over 6.5 Million ACTUAL Listener’s WorldWide, since JULY 2011) on Wednesdays 2-4pm , Saturdays & Sundays at 2-5 PM Pacific Time, WORLDWIDE!!!! … to allow her knowledge to aid the lives of all who listen or call. She is also currently working on a Television Show specifically about the Major Earth Changes and Proper Preparation to allow those who choose to apply the knowledge offered, not only to survive…but thrive AND rebuild, after these events. Psychic, Clairvoyant and Clairaudient since early childhood, Antonia knew this gift must be used properly, for the benefit of others and learned ONLY from the ‘Light’ sources. Not believing it is enough, just to be Psychic, she studied the areas of Metaphysics, Spirituality, Parapsychology along with Natural Health…in depth, to form a vast foundation and wellspring of positive knowledge on all these subjects, to help Mankind form a better understanding and awareness of Himself, and God and the Universe. All along the way… Antonia has remained a hard and fast skeptic; not just studying, but forcing ‘The Universe’ to prove the validity to her… by experiencing them. As well as being well versed in the Highest Use, in the areas of Tarot, Astrology, Numerology and Graphology; she found she was able to actually see and hear her clients ‘Guide’ or ‘Guardian Angel’ long before the trend in books and movies, etc. about others who do so. Currently in Development for a syndicated Television Show, Antonia is also writing a book series (the 1st and 2nd of the series, titled ‘The Spiritual Value of Relationships’, AND the TRUTH about the ‘2012 and Beyond- MAJOR EARTH CHANGES Events and How to Properly Prepare’, while still counseling Clients Worldwide, Teaching, Hosting Workshops on the Imminent Major Earth Changes. Antonia, often called ‘The Psychics, Psychic’, consistently maintains a high degree of professionalism to further enhance knowledge on Spiritual/Metaphysical subjects and Lectures and teaches to positively benefit the lives of others, hence…Our World. Her Mission in Life has Always been to help people achieve a greater self and spiritual awareness, AND to PROPERLY Prepare for the Massive Paradigm and Dimensional Shift currently in progress on our Planet. Thereby allowing Humankind to Evolve, as is our Planet… to a higher dimensional level, Spiritually, Mentally and PHYSICALLY…allowing for the Highest achievement of our human evolutionary Lifestream. ANYONE who has followed her work and her shows, would know that her intention has Always been ‘service to others, in the highest way’. Regarding the impending Major Earth Changes … She does NOT shy away from subjects because they are unpopular, and often ‘swims against the current’, to deliver information that NO ONE else even touches on! Her goal was not ever to gain fame or fortune, but to deliver much needed information for others, to Save Their Lives, through these Major events. A Client’s Praise below: from the #1 Winner of the Lifetime TV Show- ‘America’s Psychic Challenge’- Michelle Whitedove- told Antonia, (after extending another 1/2 hour after and Hour Reading with her) …”You know…I NEVER say this about a Psychic Reading…YOU’RE GOOD!…and I don’t say that! May I have your card…because I’d like to put it on my website…and I only have one other person that I’d ever recommend…but I’d like to put yours up there too, because I can’t get to everyone!”