Former Democratic presidential candidate and three-star Admiral Joe Sestak is an experienced, independent leader who served in the Navy for 31 years. As the highest-ranking military officer ever elected to Congress, Sestak represented Pennsylvania’s 7th congressional district. In 2006, Admiral Joe defeated a ten-term Republican incumbent to win a seat in the US House of Representatives, where he served two terms. In 2010, Rep. Sestak defeated a longtime senator in the Democratic primary. While in Congress, Sestak had a reputation of getting bills passed. In recent years, Sestak has led a nonprofit that promotes science education. Joe Sestak also has a Ph.D. He is one of the latest high-profile people to join the Forward Party, an emerging third party.

There is much to catch up on this episode with one of our favorite guests - ADMIRAL JOE SESTAK. The US moved an aircraft carrier battle group after North Korea's provocative missile launches, Russia's war on Ukraine, the upcoming General Election and the Forward Party - just to name a few topics. 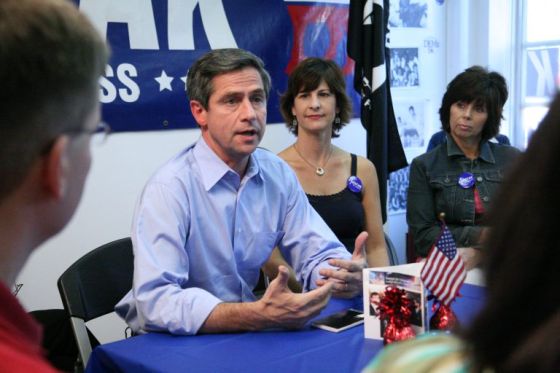 North Korea Launching Missiles, US Navy Moving Closer...What's to become of this Dangerous Game?
There is much to catch up on this episode with one of our favorite guests - ADMIRAL JOE SESTAK. The US moved an aircraft carrier battle group after North Korea's provocative missile launches, Russia's war on Ukraine, the upcoming General Election and the Forward Party - just to name a few topics. Join us for what is bound to be an interesting and provocative discussion! 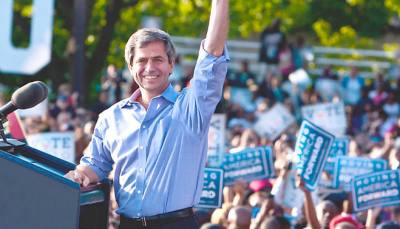 Former 3-star Admiral Joe Sestak is an experienced, independent leader who served in the Navy for 31 years and then as the highest ranking military officer ever elected to Congress when he represented Pennsylvania’s Seventh Congressional District.

When Joe Sestak’s daughter, Alex, was very young, she drew two red shoes and wrote above them, “Joe Sestak is Walking in Your Shoes.” Joe hung Alex’s drawing on his office wall to remind him of what service means: to walk in someone else’s shoes and see the world through another’s eyes.

Joe has walked in many different shoes in his life: as a father and a husband, as an officer and then an Admiral in the U.S. Navy, as a Congressman from Pennsylvania, and as he walked 422 miles across the state to speak with Americans during his Senate campaign.

It was the experience of Alex’s battle and defeat of brain cancer as a four year old child that moved her Dad to serve his country in Congress after 31 years of naval service. With her courage and the care she received from Joe’s military healthcare coverage, Alex beat that demon and Joe dedicated himself toward everyone having access to the same quality of healthcare. After resigning from the Navy and Alex’s recovery, he ran and won in a Republican District under the slogan, “National security begins at home, in health security.”

Joe Sestak is an experienced, independent leader who rose to the rank of 3-star Admiral.  He was the highest ranking military officer ever elected to Congress when he represented Pennsylvania’s Seventh Congressional District from 2007-2011. He commanded an aircraft carrier battle group that conducted combat operations in Afghanistan and Iraq with 30 U.S. and allied ships and more than 15,000 sailors and 100 aircraft.  Joe served as President Clinton’s Director for Defense Policy on the National Security Council in the White House, the first Director of the Navy’s strategic anti-terrorism unit (Deep Blue) after 9/11, and the Deputy Chief of Naval Operations for Warfare Requirements responsible for the Navy’s five year $350 billion warfare requirements. As Deputy Chief of Naval Operations, he proposed a controversial reduction in ship-levels from 375 to 260 ships that proved unnerving to the military-industrial-congressional complex, advocating for a greater future capability by harnessing cyberspace, at less cost.

In addition to leading a series of operational commands at sea, Joe received a PhD in Political Economy and Government, and a Masters in Public Administration, from Harvard University.  But he is most proud of being dad to Alex and the husband of Susan, whom he somehow convinced to marry him, as she has also taught him much. This includes from work in international environmental issues, from Kazakhstan to Mozambique; Russian relations, even into Soviet Union archives as U.S. teams still search for clues to our missing POW/MIAs, and on suicide prevention for the Veterans Administration and the Defense Department.

Born and raised in Delaware County, Pennsylvania, where he attended Cardinal O’Hara High school prior to graduating from the U.S. Naval Academy, in 2006 Joe defeated a ten-term Republican incumbent in his nearly 2:1 Republican home District to become the second Democrat congressman since the Civil War. As a member of both the Armed Services and Education & Labor Committees, and as Vice Chairman of the Small Business Committee, Joe had 19 pieces of bi-partisan legislation passed in the House during his first term, and was named the most productive member of his Congressional class by the Majority Leader’s Office in 2007. He was also recognized for serving four times the constituent cases than the average Congressional office, while hosting an average of 15 large summit gatherings in his district each year on key issues. As a result, his Republican District re-elected Joe by 20 points without his having to air a single campaign ad.

Joe ran for U.S. Senate in 2010, despite the opposition of the Democratic party’s Washington establishment. He disagreed that Republican Senator Arlen Specter should become the party’s nominee in order to avoid defeat in the Republican primary after his 30 years of damaging votes, particularly his humiliation of Ms. Anita Hill when she testified about her sexual harassment by now-Supreme Court Justice Clarence Thomas. Joe believed Pennsylvanians deserved a leader who would always be accountable to the principle of people first, ahead of self, party or special interest. Against the odds, he overcame a 40 point deficit to win the Democratic primary over the 30-year incumbent. The general election was decided by only two points in the Tea Party year where the party lost the Pennsylvania governor’s race and five Congressional seats by an average of 11 points – all despite being outspent more than any other Senate or Governor’s race (except one) in America that year.  Afterwards, Joe went to each of Pennsylvania’s 67 counties to thank his supporters, including countless African-American churches, synagogues, mosques and other places of worship that welcomed him.

In Joe’s second Senate race, Joe launched his campaign by walking 422 miles across Pennsylvania, from the border with New Jersey to that with Ohio, stating that “we are in a fight for the soul of America” at the kickoff and throughout the remainder of the election. He held a town hall each day in small towns and cities, and then went to each of the remaining 67 counties. Simultaneously, he published his vision in a policy-based book, “Walking in Your Shoes to Restore the American Dream.”

However, the Democratic Senate leadership directed Joe to “stop walking and just fundraise.”  When Joe demurred, the Democratic leadership sought a primary opponent, funneling over $6 million into false opposition ads that the Washington Post assigned its highest rating of falsity, to win the primary, but losing the general election.

In Congress, Joe championed fiscally accountable “pay-as-you-go” legislation to help ensure its passage.  He advanced educational legislation, from pre-K through retraining; seniors’ quality of life – including authoring and passing the first Elder Abuse Victims legislation in 17 years — and veterans’ educational and healthcare expansion.  He sponsored small business legislation for access to start-up capital, tax and regulatory relief, and workforce development, including initiating and passing legislation for a 35% increase in funding for Women’s Business Centers. He pursued healthcare issues ranging from pediatric cancer to mental health parity, as well as autism as he authored the first successful increase in funding for autism in 12 years. Chosen to serve on two bi-partisan national security Select Congressional Committees, he worked on refocusing our security force posture toward the Western Pacific and China, advocating a new emphasis on cyberspace warfare, and reprioritization of defense funding toward such newly emerging warfare capability areas, with a reformed accountable defense procurement system.  Joe also supported energy development legislation for renewables, with environmental safeguards and job creation, to address Climate Change.

After Congress, Joe taught courses on Ethical Leadership and on Restoring the American Dream at Cheyney University – the oldest historically black university in America – and Carnegie Mellon University, and was the General Omar N. Bradley Chair in Strategic Leadership, a joint faculty appointment at the United States Army War College, Dickinson College, and the Penn State University Dickinson School of Law and School of International Affairs.

Admiral Sestak remained active in public service through the Center for Refugee and Disaster Response at the Johns Hopkins Bloomberg School of Public Health; the Ploughshares Fund working on the reduction of nuclear weapons; the Lenfest Foundation focused on education in Philadelphia, pre-K through early childhood, and those who had or were about to drop out of high school; co-chair with former Republican governor Mark Schweiker of the Pennsylvania State Advisory Committee of the U.S. Global Leadership Coalition, focused on U.S. diplomacy and development; then-Secretary of State Clinton’s Advisory Committee on U.S. educational programs; and the Children’s Brain Tumor Foundation, as well as issues regarding small businesses, energy and the environment.

Finally, Joe convened the youth of the world from nearly 160 nations at Constitution Hall in Washington DC for the inaugural robotics Olympics highlighting the need for global STEM education, as teams from the Congo to Iran, a Syrian refugee team and an all-girls Afghan Muslim team showed we have more in common in the world than we do differences.

Most importantly, having served with all Americans in the global canvas of the Navy, and served you as a Congressman, Joe knows that Americans have more in common than we do differences. Now, as President, Joe will need all of you to help answer the call for America’s leadership to restore a just world order so it serves us by raising our collective good, here at home – done by Joe’s gaining your trust that he will always remain accountable to you, alone.