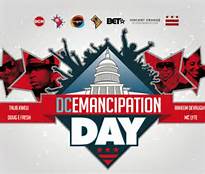 A wide range of events are arranged in Washington DC to mark Emancipation Day. These are spread throughout the month of April and include exhibitions, public discussions, presentations of historic documents, the laying of wreaths, concerts and poetry readings. The events aim to educate a broad spectrum of people about the history of the municipality of the District of Columbia in general and slavery in particular. Attention is also paid to the African origin of many slaves and racial issues in modern American society.