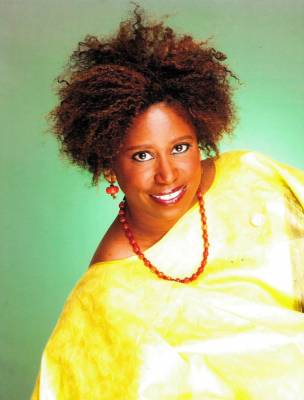 After serving in the Georgia Legislature, in 1992, McKinney won a seat in the U.S. House of Representatives. She was the first African-American woman from Georgia in the U.S. Congress. She was the first Member of Congress to demand an investigation of the events of 9/11/2001. McKinney was criticized and as a result, she was defeated in 2002; however, she ran again and was re-elected in 2004.

In 2005, McKinney was a vocal critic of the government’s response to Hurricane Katrina. Cynthia introduced legislation to release documents related to the murders of Dr. Martin Luther King, Jr. and Tupac Shakur. She was the first Member of Congress to file articles of impeachment against George W. Bush; and she voted against every war-funding bill put before her. In 2008, Cynthia McKinney won the Green Party nomination and ran for U.S. President.

In December 2008, Cynthia made international headlines when her boat was rammed by the Israeli military as she was attempting to deliver medical supplies to Gaza. In 2009, Cynthia attempted to reach Gaza again, this time armed with crayons, coloring books, and school supplies. Her boat was overtaken in international waters by the Israeli military and she was kidnapped to Israel. Cynthia spent 7 days in an Israeli prison. Finally, Cynthia entered Gaza by land in July 2009 with George Galloway's Viva Palestina.

Cynthia completed a cross-country bicycle ride with Bike4Peace 2010. In August 2011, Cynthia visited 21 cities to end the bombing of Libya. More recently, Cynthia participated in Malaysia’s Perdana Peace Organization and served as a Juror on the Bertrand Russell Tribunal on Palestine.

In 2015, Cynthia completed her dissertation on the transformational leadership of Hugo Chavez and was awarded a Ph.D. in Leadership and Change.

Cynthia currently possesses technical proficiency in the French language, but because Cynthia’s current research interest centers on Asia, Eurasia, and the U.S., she is now learning Chinese.

Cynthia has two books to her credit and several Chapters that she has authored in the books of others.Mahathir Mohamad’s efforts to “criminalize war.” She has appeared in Kuala Lumpur several times, declaring that city the Peace Capital of the World. She recently reported on her experience in Libya in the “Arab Uprising” Conference organized by the Perdana Global Peace Foundation and served as an official observer at the historic Kuala Lumpur War Crimes Tribunal that, on 22 November 2011, found former President George W. Bush and former Prime Minister Tony Blair guilty of the crime of aggression and other crimes against the state and people of Iraq.

Elected six times to the House from the state of Georgia, Cynthia McKinney cut a trail through Congressional deceit like a hot ember through ash. She discovered legislators who passed laws without reading them. Party leaders who colluded across party lines against their constituents' interests. Black-skinned individuals shilling for the white status quo. She excoriated government lassitude over Hurricane Katrina, uncovering dark secrets. She held the only critical Congressional briefing on 9/11, introducing counter-testimony of scholars, investigators, former intelligence agents.

As a member of the House Armed Services Committee, she held Rumsfeld to account for malfeasance by military contractors and missing billions in the Pentagon's budget. Then she hammered him on the reasons for the failure of NORAD air defenses on 9/11. She read truth into the Congressional Record, held town halls and hearings, led protests, showed up while others played along to get along, took the side of the people against the will of the Party. And when she got too truth seeking and speaking, the Republicans rigged the Democratic primaries to boot her out, leaving behind a trail of achievements mostly won singlehandedly. But McKinney rose again like a Phoenix, answering the call to run as 2008 Green Party candidate for President, challenging the corrupt two-party stranglehold on American democracy.

Then it was on to the Freedom Flotilla to Gaza, to be seized on the high seas and imprisoned in Israel. On to Tripoli, to serve as witness to the NATO terror bombing of Libya. On to Malaysia to serve on the War Crimes Commission... Often introduced as the Sojourner Truth, the Harriet Tubman of our age, McKinney reflects here on the Biblical figures of Esther, Deborah and Naomi. This is the Cynthia McKinney saga as it stands to date--what she saw, what she learned, and how she fought for change. 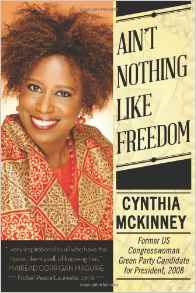