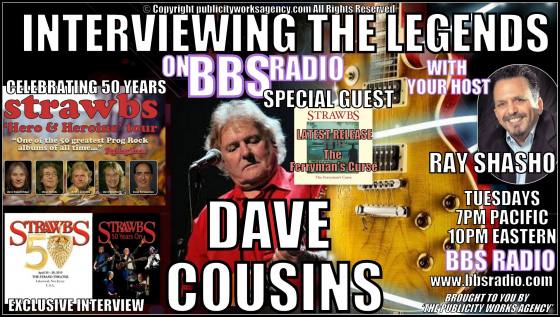 British rock legends Strawbs will mark their 50th anniversary with a three-day event filled with exclusive musical performances that feature the band’s current line-up, special guests and many of the artists that have contributed to the band’s sound over its five-decade history. The event will take place at The Strand Theater in Lakewood, New Jersey from April 26 through April 28, 2019 and will be hosted by Strawbs founding member David Cousins, along with long serving band mates Chas Cronk, Dave Lambert, Tony Fernandez and the band’s latest addition, Dave Bainbridge. Featuring special guests Tony Visconti, Annie Haslam, Larry Fast and others! 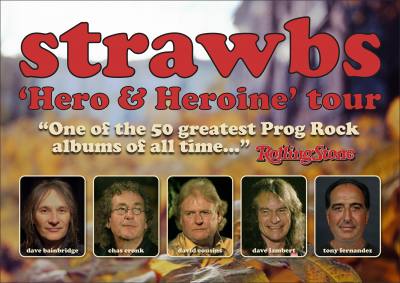 Strawbs are Britain's most successful international progressive folk-rock band. They are mentioned in the same breath as progressive rock bands Yes, King Crimson and The Moody Blues. Strawbs have a devoted fan base that continues to grow on the strength of their incredible live performances together with their classic albums over the years including "Grave New World", "Bursting at the Seams", "Hero & Heroine" and "Ghosts." The band has achieved sales of over three million albums, seven consecutive Strawbs albums have featured in the US Billboard Top 200 albums.

Many top musicians have featured in the Strawbs line up over the years, including Sonjia Kristina, Blue Weaver, Don Airey and as well as Rick Wakeman , both his classically trained sons Adam and Oliver have been featured, a certain compliment to the band's talent. After several years of touring in both acoustic and electric lineups, in 2017 Strawbs released "The Ferryman's Curse", their first studio album of original material in eight years. The album returned to the album charts and garnered rave reviews worldwide!

The current Strawbs line-up comprises David Cousins, lead guitarist Dave Lambert, bass player Chas Cronk, and drummer Tony Fernandez, who recorded and toured together in the 1970s. They are joined by keyboard and guitar virtuoso Dave Bainbridge of Iona - a band who created a mystical blend of rock, folk, Celtic and ambient music - a perfect match for Strawbs.

British rock legends Strawbs will mark their 50th anniversary with a three-day event filled with exclusive musical performances that feature the band’s current line-up, special guests and many of the artists that have contributed to the band’s sound over its five-decade history. 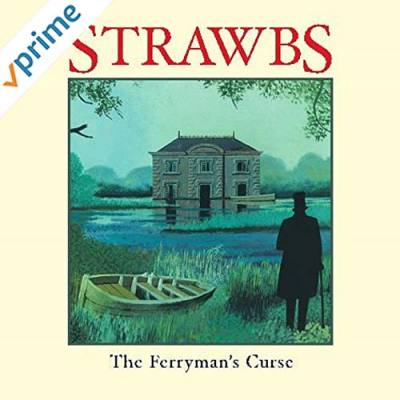 The band will tour the USA in 2019 as part of their 50th Anniversary Celebration. The tour includes a special three-day event in Lakewood, NJ and will have former members (Rick Wakeman, Sonjia Kristina, Blue Weaver, Don Airey) along with special guests/friends appearing (Annie Haslam, Larry Fast, Tony Visconti, Wesley Stace among others)

Purchase the latest release from the Strawbs entitled The Ferryman's Curse at amazon.com (5) stars!

How did a working-class boy from West London come to discover Sandy Denny and Rick Wakeman, work with iconic figures like David Bowie, Dickie Attenborough, and Dame Vera Lynn; meet royalty; change the face of commercial radio; and be granted God’s abundant blessings by The Pope? Find out in Dave Cousins Autobiography ‘Exorcising Ghosts: Strawbs & Other Lives’ Hardcover – December 15, 2014  available at amazon.com

Very special thanks to the great Billy James of Glass Onyon PR for arranging this interview with DAVID COUSINS and of course the dynamic duo of Doug & Don Newsom of BBS Radio for making the magic happen for each and every broadcast of Interviewing the Legends. If you have comments or suggestions for the show contact me at interviewingthelegends@gmail.com and please subscribe to my You Tube channel interviewing the legends with Ray Shasho for the very latest interviews … It’s REAL news people!

Also don’t forget to purchase a copy of my book entitled Check the Gs -the true story of an eclectic American family and their Wacky family business ... available now at amazon.com. You’ll live it!!!