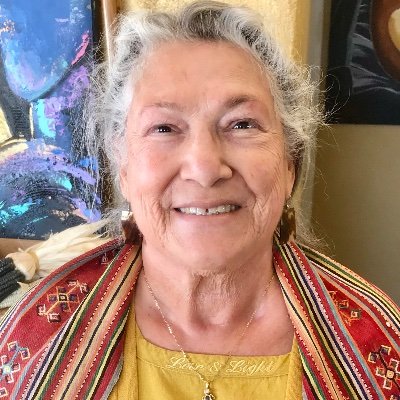 Grandmother Flordemayo, Curandera espiritu (healer by divine spirit) and Mayan priestess, is one of the 13 grandmothers of the International Council of Thirteen Indigenous Grandmothers, a global alliance that teaches ancestral ways of prayer, education and healing.

The youngest of 15 children, Flordemayo was born in the big highlands of Central America on the Nicaragua/ Honduras border. She grew up in a family of traditional healers. When she was 4 years-old, she began learning the art of “Curanderismo” in the traditional way: taught from mother to daughter, generation to generation.

Flordemayo is President of The Confederation of Indigenous Peoples of the Americas, an organization that carries the wisdoms of traditional native people to a global audience. She is a featured speaker on Curanderismo at international conferences about traditional medicines, She has also worked with Native American and alternative western healers, and her knowledge and healing skills are recognized by medical doctors, nurses and medical institutions.

Flordemayo says, “In this time of movement, where celestial doors have opened, we must do what we have been asked to do. We are standing in the movement and the vibration of a sacred prophecy. The prophecy tells us that consciousness is preparing the spirit of the feminine, the spirit of the grandmothers. It is in the prophecy that we shall walk into the light, united from the four directions.”

She founded The Path an organization dedicated to the conservation and preservation of heirloom and heritage seeds. She is a regular contributor of workshops to The Shift Network.

She is a founding member of the Church of the Spiritual Path, the Confederation of Indigenous Elders of the America, Institute of Natural and Traditional Knowledge, The International Council of Thirteen Indigenous Grandmothers, Grandmothers of the Sacred We, and The Mother Earth Delegation of United Indigenous Nations.