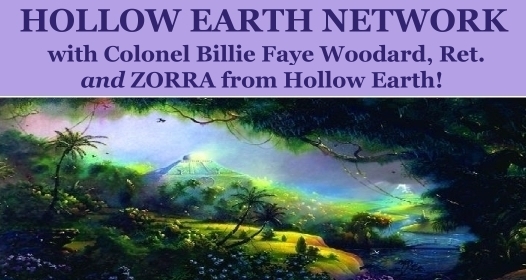 This radio show allows Earth's surface population to communicate directly with Zorra from Hollow Earth. Zorra's child, Colonel Billie Faye Woodard, Retired, resides on the surface to facilitate this communication. Zorra's Message to us: You are Gods and Goddesses ... true Creators. Your brothers and sisters residing in Hollow Earth deeply love you and want to help you through Earth's, and your ... coming Transition.

Soon... Adama from the subterranean city of Telos, will make his appearance. He, and other Telosians will bring their technology capable of purifying our atmosphere and oceans. Later, when time for the Gathering, those from Hollow Earth will emerge to help Earth's surface population with their Transition into 5th Dimension.

The time is close for Disclosure. Ships from other Star Systems, or "Arks," are already arriving and taking their positions in preparation for...

Destinations are determined by DNA.

Born in Hollow Earth as a 5th Dimensional Being; In 1951, deposited here on the Surface as a 3rd dimensional child. Today Billie continues to fulfill his intended Mission...

The extended 1947 Mission of Admiral Byrd!

After his return to the Surface in 1947, Admiral Byrd was prevented from publicizing his knowledge that the Earth is hollow; that the Earth has a large population of highly evolved benevolent 5th Dimensional Beings residing within who will soon be contacting us; that we are all one family and will soon be reuniting and expanding our lives together.

Billie and his twin sister were born shortly after that, and four years later, in 1951, began their destined Surface Mission to educate us that...

1. Our Earth is Hollow. Advanced, benevolent civilizations live within our Earth and will soon be emerging and helping us through Earth's coming Transition.

2. Nuclear fuels are exposing Earth's populations to harmful side effects and will be stopped.

3. Fossil fuels are also harmful contaminants and will be replaced with safe and natural energy.

4. All diseases are curable and can be avoided.

5. Many hearing these messages will soon be transitioning into 5th Dimension.

6. It is important for us to understand that we are Unlimited Beings and can reclaim our Godhood. 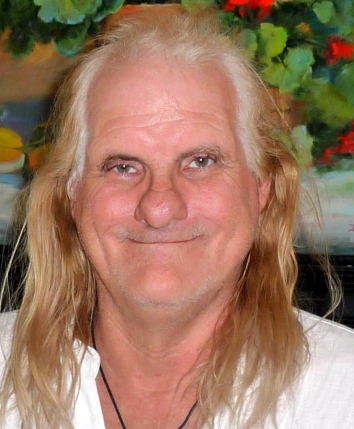 As a small child my eyes where always fixed to the Heavens above. So much I was diagnosed with what is known today as ADHD and was treated with drugs. This only suppressed my spirit and trapped me to the Earth with the rest of the surface dwellers. At 15, I was floored (literally) by a voice that spoke to me internally-yeeees thats right I said internally. As if every single atom vibrated and spoke as one. After that, events and effects started to happen in life and became more interesting as time progressed. Time displacements and slips, USO's, UFO's, physical Angelic contact. Its been a difficult, lonely and stressful life at times. However I'm a firm believer that GOD, The Force/ Divine Source of all things and all that it has created is not in vain. We Earthlings who think alike have been in waiting for what seems like an eternity for our purpose to unfold. I am firm in knowing that THIS TIME HAS ARRIVED...