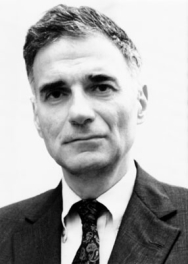 “There can be no daily democracy without daily citizenship.” Ralph Nader

Ralph Nader is one of America’s most effective social critics. Named by The Atlantic as one of the 100 most influential figures in American history, and by Time and Life magazines as one of the hundred most influential Americans of the twentieth century, his documented criticism of government and industry has had widespread effect on public awareness and bureaucratic power. He is the “U.S.’s toughest customer” says Time magazine. His inspiration and example have galvanized a whole population of consumer advocates, citizen activists, and public interest lawyers who in turn have established their own organizations throughout the country.

For over four decades, Nader has exposed problems and organized millions of citizens into more than 100 public interest groups to advocate for solutions. His efforts have helped create a framework of laws, regulatory agencies, and federal standards that have improved the quality of life for two generations of Americans. Because of Ralph Nader we drive safer cars, eat healthier food, breathe better air, drink cleaner water, and work in safer environments.

The crusading attorney first made headlines in 1965 with his book Unsafe at Any Speed, a scathing indictment that lambasted the auto industry for producing unsafe vehicles. The book led to congressional hearings and a series of automobile safety laws passed in 1966, including the National Traffic and Motor Vehicle Safety Act.

Since 1966, Nader has been responsible for at least eight major federal consumer protection laws such as the motor vehicle safety laws, the Safe Drinking Water Act, the Meat and Poultry Inspection Rules, the Clean Air Act, the Clean Water Act, and the Freedom of Information Act. He was instrumental in the creation of the Occupational Safety and Health Administration (OSHA), the Environmental Protection Agency (EPA), the Consumer Product Safety Commission, and the National Highway Transportation Safety Administration. Many lives have been saved by Nader’s involvement in the recall of millions of unsafe consumer products, including defective motor vehicles; in the protection of laborers and the environment; and, in creating an atmosphere of corporate and governmental accountability.

Nader also helped establish the PIRGs– Public Interest Research Groups– the student-funded and controlled organizations which function on college campuses in 23 states. Their impact alone has been tremendous. The groups have published hundreds of ground-breaking reports and guides, lobbied for laws in their state legislatures, and called the media’s attention to environmental and energy problems.

The largest of the Nader organizations is Public Citizen, founded in 1971. The groups under the Public Citizen umbrella include Congress Watch, Health Research Group, Critical Mass Energy Project, Global Trade Watch, and the Litigation Group. Public Citizen’s nationwide membership has grown to over 100,000.

It is hard to keep up with Nader. He has built an effective national network of citizen groups that have had a major impact in areas ranging from tax reform to nuclear energy to health and safety programs. The ultimate goal of this movement is to give all citizens more rights and remedies for resolving their grievances and for achieving a better society. As The New York Times said, “What sets Nader apart is that he has moved beyond social criticism to effective political action.”

Nader’s overriding concern and vision is presently focused on empowering citizens to create a responsive government sensitive to citizens’ needs. The top of Nader’s agenda has been defending the U.S. civil justice system. Corporate lobbyists and certain legislators have worked on both the federal and state levels to restrain consumers’ rights to seek justice in court against wrongdoers in the area of product liability, securities fraud, and medical negligence. Nader co-authored a book on corporate lawyers and the perils of the legal system entitled No Contest.

The current financial crisis is also a large concern of Nader’s; the deregulation of the banking industry in the early 1980s through the late 1990s led to speculative real estate deals and casino capitalism. Taxpayers are now being forced to pick up the tab for the bailout of the Wall Street speculators. This is one of many examples of corporate subsides taxpayers finance through a system Nader calls “corporate welfare.” Nader is also an advocate of insurance reform, including loss-prevention activity and insurance consumer education. He co-authored the book Winning the Insurance Game, and has been working with consumer activists in Massachusetts and California on improving the cost and coverage of automobile and health insurance in those states.

Today, Nader writes and lectures on the growing “imperialism” of multinational corporations and of a dangerous convergence of corporate and government power. With the passage of autocratic trade treaties like the North American Free Trade Agreement (NAFTA) and the General Agreement on Tariffs and Trade (GATT), this merger of corporate and government interests is escalating. Since the 1970s, Nader has advocated for the total abolition of nuclear and fossil fuel energy in favor of solar, tidal, wind, and geothermal sources because of environmental, labor, national security, disaster preparedness, foreign policy, and government accountability concerns. A magazine founded by Nader in 1980, the Multinational Monitor, tracks the global intrusion of multinational corporations and their impact on developing nations, labor, and the environment.

Nader is undaunted by the de-regulatory setbacks posed over the last three decades by four successive administrations from both parties. As such, Nader has been building the foundation of a third political party and a robust progressive political movement since participating in the Green Party’s first presidential campaign in 1996 to challenge the duopoly of the Republican and Democratic parties; or, as Nader calls them, “tweedle-dee and tweedle-dum”. Nader’s political motivation is best demonstrated by his recognition that “You’ve got to keep the pressure on, even if you lose. The essence of the citizen’s movement is persistence.”

Nader certainly has remarkable tenacity, as well as an unshakable commitment to his mission. When asked to define himself, he always responds, “Full-time citizen, the most important office in America for anyone to achieve.”

Nader’s impact on the American political spectrum is enduring. As former U.S. Senator James Abourezk observed, “For the first time in U.S. history, a movement exists whose sole purpose is to keep large corporations and the government honest.”

Unsafe at Any Speed

The Designed-In Dangers of The American Automobile.

This is what TIME Magazine said: “Politics and war, science and sports, memoir and biography — there’s a great big world of nonfiction books out there just waiting to be read. We picked the 100 best and most influential written in English since 1923, the beginning of TIME … magazine”

Ralph Nader’s book Unsafe at Any Speed is number 21 on the list!

Unsafe at Any Speed was published in 1965. It is Ralph’s first book. And it was the book that launched the modern consumer movement.

You can purchase the beautiful hardcover commemorative edition of Unsafe at Any Speed – the American classic that saved hundreds of thousands of lives — autographed by Ralph for $100. You will get a wonderful book, and your $100 dollars will help the Center for Study of Responsive Law, the organization that Ralph founded to keep fighting to make corporations and our government more accountable. 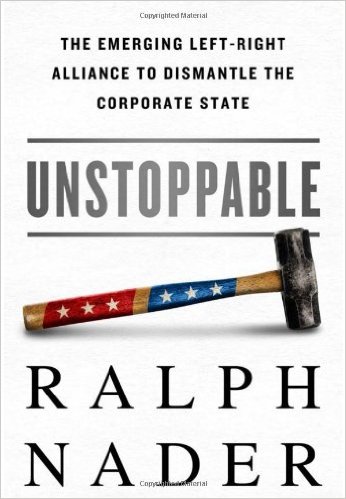