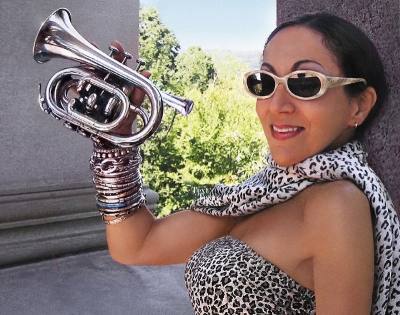 Meet Ginetta M. ,the “Triple threat Female powerhouse” who plays pocket trumpet, sings & composes. Leading her acclaimed Jazzy, funk ,original  band Ginetta’s Vendetta (c.) around the world from Moscow to Jakarta, Paris to Beirut, Jamaica to California, Canada and Mexico, she continues to spread her gospel of “Peace Thru Music ” & considers herself an ambassador of goodwill representing her hometown of NYC & the U.S.A.  2019 was yet another banner year for Ginetta’s Vendetta, cementing her status as an internationally acclaimed artist & bandleader, with her most recent “Diplomatic Immunity Tour 2019 “. It took her (with her band) to the lovely country Of Moldova in Eastern Europe, where they represented America’s greatest export: Jazz,  at the “America Days” Festival. They traveled to various parts of the country & got to meet, and play for, Ambassador Dereck J. Hogan.

She also recorded her 5th (!) CD: “Pocketful Of Cool” (released 9/21/19) which is currently rising on the Jazz Charts & on the Grammy Ballot 2020 in 7 categories! It is still garnering fabulous reviews, both international & Domestic. (See them on the “Press Page”)  She added yet another Country to her list when she traveled to the Cayman Islands to play at the Masque Ball & Carnival in May. Not to mention her annual tour thru Mexico, which includes Mexico City, San Miguel Allende, Ajijic, Guadalajara & beyond! Ginetta’s Vendetta’s previous “Diplomatic Immunity Tour 2018”  took her to Moscow where she played  at the U.S. embassy for Ambassador John Huntsman Jr. and dozens of visiting dignitaries! Her tour continued through the Russian Far East, headlining The Vladivostok International Jazz Festival, then onto Nahodka,Yuzhno-Sakalinsk, Khabarovsk & beyond!! Treated like a rock star with tour buses, suites, television appearances, numerous Radio interviews, podcasts & press in major publications, Ginetta added thousands of new fans in Russia.

For 2 years in a row  (2017 ,2018) Ginetta’s Vendetta was the house band on the yacht “Manhattan” playing jazz in the summer & Christmas carols in the winter. They sailed up & down the Hudson river and to the Statue of Liberty daily  with magnificent views of the city. She is always a festival favorite and played with her band Ginetta’s Vendetta (c.) at The San Jose Jazz  Summerfest 2017 and co-headlined an appearance (with organist Tony Monaco!) at the biggest Jazz Festival in the world, The Java Jazz  Festival 2015, along with Headliners Chaka Khan & Chris Botti! (Her & Botti were both reviewed in the  Indonesian press as “Trumpets of Death”, one widely known & the other up & coming, Me)  Other festivals include The Prishtina Jazz Festival, The Vladivostok International Festival (previously mentioned), The St. John Blues festival, The Gainesville Jazz Festival, The Bellayre Music Festival, The Hudson Black Arts Fest, The Ocho Rios Jazz Festival  (7 times) & various NYC & Jersey Summer Festivals.

Her first Jazz CD (her 3rd as a bandleader) “Standards”  was in the top 20 on the National JazzWeek charts & again on the Grammy ballot in 9 categories, including Best Instrumental Soloist & Best Arrangement with Vocals. Following up her previous success with the Jazz format,  she then recorded her 4th CD: “Little Big Horn in 2015. It contained more classics including a magnificent rendition of  The Beatles “Yesterday” & her much acclaimed version of the iconic Lee Morgan tune: “Sidewinder.  “Little Big Horn was also on the Grammy ballot in 10 categories including Best Improvised Jazz Solo & Best Arranger.

Her 2nd CD: “Land On My Feet” was also a contender on the 55th  annual Grammy  ballot  in 5 categories including  Best Pop Song for a Duo or a Group with her original tune: “Choose Love”. Plus the title track was chosen for the Supercuts “Rock The Cut” campaign. Her Debut CD: “La Dolce Vita” includes the haunting ballad : “Can Our Tears Put Out the fire?”, winner of an Honorable Mention in the Billboard World song contest. It was commissioned in the wake of September 11th. “La Dolce Vita” also recieved 2 more billboard awards for her original tunes: “I Believe in You” & “Behind Those Eyes”.  She is the recipient of four (4) AscaPlus awards for songwriting, The Music Liberty initiative of NY award, “The Best Of” award from Soul Patrol  plus letters of commendations from various festivals & many more accolades too numerous to mention. Ginetta is an alumna of the famed music school North Texas State University, and has decades of experiance on the road & in the studio. Her recordings as a “sideman” exceed count & her distinctive sound can be heard covering a variety of styles  from Compa, Salsa, R & B & Jazz  to Pop, horn sectionals, Singer-songwriter, Indie artist & more!

In the early years she played with many Latin, Compa, Calypso, Merengue & Salsa bands, taking her on tours through Puerto Rico, Haiti, South America, Martenique & Guadeloupe.She also spent a Carnival season in Trinidad with her female horn section Amazon Brass. Blues was also a defining factor in her musical evolution and she was an honorary “Holmes Sister” with the incredible “Holmes Brothers” band, playing with them for years and touring with them thru Canada, Nova Scotia and New England. She was always added to the horn section of Blues Legend Albert Collins whenever he came to NYC.  A two-year stint at the biggest Russian club in NYC “The National” was followed by 3 more years on the road w/ the show band “Waterfront” covering the casino & hotel circuit. She also was the sole horn player &  featured soloist for the American debut tour of The Boo Radleys, covering 45 states in 7 weeks! Playing at The Blue Note in Beirut in 2005, then again in 2010 gave her an opportunity to expand her fan base across the globe. The 2010 tour also included 2 television appearances on the Middle  East version of MTV.

A featured performer at the St. John Blues Festival gave Ginetta yet another stage to conquer, this time in the beautiful U.S. Virgin Islands. She headlined at The Hudson Black Arts Fest 2 years in a row, plus a 2 week engagement in Las Vegas with her band. This won her many new fans in the entertainment capitol as well as a rave review from “Las Vegas City Life” calling her a “Poolside Patsy Kline”.  Her need, however, to lead a band, sing, play and compose was the defining factor in the creation of “Ginetta’s Vendetta”. Formed years ago, the band is comprised of the basic “power trio” of guitar, bass & drums, with the occasional addition of Piano & Saxaphone for recordings. Ginetta’s Vendetta has held weekly residencies at the Trump Soho Hotel, The World Bar, Vic & Anthonys  (3 Nights a week), The Harlem Tavern, Farafina Supper Club, Baby Brasa, Jules & various NYC institutions which complete her busy itinerary in between her travels.

With radio stations from Canada to Mexico & all points in between playing her CDs, myriad radio interviews and stellar press in a dozen languages, Ginetta continually forges ahead making each year better than the last! Playing only the funkiest version of the Jazz classics & singing her danceable originals, Ginetta commands any stage with her signature pocket trumpet, sultry vocals & special brand of high-octane entertainment. She is a multidimensional entertainer with a limitless supply of energy and versatility.