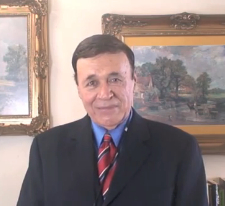 Victor James Zammit, B.A.Grad. Dip.Ed. M.A. LL.B. Ph.D, worked as an attorney in the Local Courts, District and Supreme Courts in Sydney Australia. For many years his main interest was in human rights and social justice. Around 1990 he began to experience spontaneous clairvoyance and clairaudience which led him to begin a systematic investigation of the afterlife. He was astonished to discover a hidden world of research that he felt provided overwhelming evidence for life after death. Since that time his priority has been sharing his discoveries on his website where an earlier version of his book was viewed by more than a million people.

AS AN AUTHOR Victor Zammit wrote A LAWYER PRESENTS THE CASE FOR THE AFTERLIFE (National Library of Australia Card No. and ISBN 0-9580115-0-8), which is on the internet. This book has been translated into Italian, Portuguese, Spanish, Russian, French, Dutch and now is in the process of being translated into German.

Victor's partner Wendy Zammit has been researching the evidence for the afterlife with him for more than twenty years. She is the co-author of "A Lawyer Presents the Evidence for the Afterlife" and the Friday Afterlife Report that is sent weekly free of charge to thousands of subscribers all over the world.