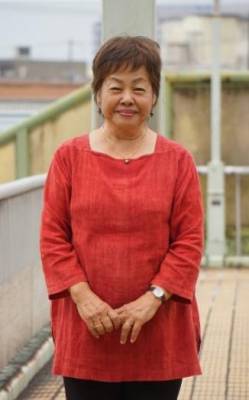 Guest Website
http://www.genuinesecurity.org/partners/okinawa.html
Guest Category
Education
History
Politics & Government
Guest Occupation
Women's Rights Activist
Guest Biography
Suzuyo Takazato was born in Taiwan in 1940, and graduated from Okinawa Christian Junior College. After serving in positions including as a women's counselor for the Naha Municipal Government, she served four terms as a member of the Naha Municipal Assembly over 15 years. She is head of the Rape Emergency Intervention Counseling Center Okinawa. Her authored works include "Okinawa no Joseitachi: Josei no Jinken to Kichi, Guntai" (Okinawan women: women's rights, bases and the military).

Purpose of Visit
We, the delegation from Okinawa, have come to California to promote awareness of the enduring military base problems in Okinawa, Japan.  We plan to participate in the APALA  convention, and to request assembly members, universities and NGOs, to have a round-table conference, in order to stop the construction of a new U.S. Marine Corps air base at Cape Henoko in Nago City, Okinawa.

The U.S. military built its network of bases on the island by forcibly appropriating villages, homes and farmlands in the wake of the Battle of Okinawa seventy-two years ago. After the war, the U.S. military continued to appropriate Okinawan land to make way for more bases. Even now, thirty-one U.S. bases and military installations occupy private land and residential areas. Therefore, many U.S. base related problems have occurred constantly. Last year, a young twenty 20 year old woman was raped and killed by an ex-marine U.S. civilian employee as she walked home.

The most critical problems facing Okinawans today are as follows:

The cancellation of plans to construct the new Marine Corps air base at Cape Henoko, which involves massive land reclamation of a beautiful coral reef marine ecosystem and the habitat of the critically endangered Okinawa dugong (sea manatee).

To stop flight training and to end the construction of six new helipads in the Yanbaru forest in northern Okinawa. This construction will result in the permanent destruction of forestland said to be comparable to a World Natural Heritage site, as well as the erosion of the quality of life for local residents of Takae Village.

The closure and return of U.S. Marine Corps’ Futenma Air Station. Often referred to as the most dangerous base in the world, continued operations in the densely populated residential areas of Ginowan City violate both US and Japanese safety standards. The deployment of the accident-prone MV-22 Osprey tilt-rotor aircraft to Futenma in 2012 faces strong opposition across Okinawa, particularly considering the recent crash off the Okinawan coast in December of 2016.