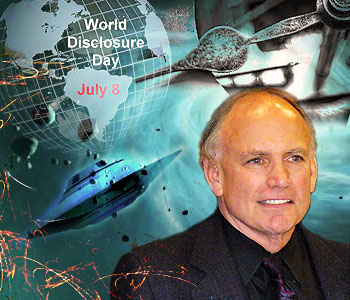 Stephen Bassett is a leading advocate for ending the 65-year government imposed truth embargo regarding an extraterrestrial presence engaging the human race.  He is a political activist, lobbyist, commentator, the executive director of Paradigm Research Group and the Extraterrestrial Phenomena Political Action Committee (X-PPAC) and executive producer of the X-Conference.  His work has been covered extensively by national and international media.

Since 1996 Bassett has assisted numerous organizations and initiatives working to 1) raise public awareness of the both the extraterrestrial presence and the truth embargo, 2) convene open congressional hearings to take government and agency witness testimony, and 3) incite the political media to appropriately cover the attendant issues.   He has appeared in over 1,000 radio and television talk shows and in numerous documentaries speaking to millions of people about the implications and likelihood of "Disclosure" - the formal acknowledgement of the extraterrestrial presence by world governments