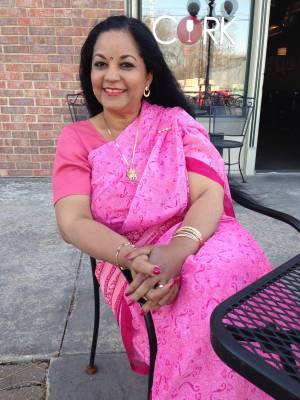 Ruffina Farrokh Anklesaria has been teaching Meditation since 1978, when she was made a teacher of the Transcendental Meditation program by Maharishi Mahesh Yogi. Since then, she has taught meditation to over a thousand people, including many in corporate settings.

In 2013, Ruffina revealed that she had experienced a major shift in her consciousness 20 years prior, resulting in the opening of her third eye. It enabled her to see the world as made of light, and to gain more knowledge from the object of perception. This included the ability to see the previous incarnations of those at whom she looked “with intention.” It opened new channels of knowledge, of love, and bliss, within her.

She realized she could transfer these abilities to others by looking at them merely with her intention to do so. She calls this transference of spiritual energy “Shaktipat.”

Ruffina holds “Full Moon Shaktipat Retreats” both in her hometown in Ferguson, Missouri or at other locations by invitation. 100% of her retreat participants (about 75 persons) report having changes in their perception when Ruffina gives them Shaktipat.

She can be contacted by email at: tsmo.org@gmail.com. Her Facebook page is at: Ruffina’s Shaktipat. Her Voicemail is: 314.521.4390