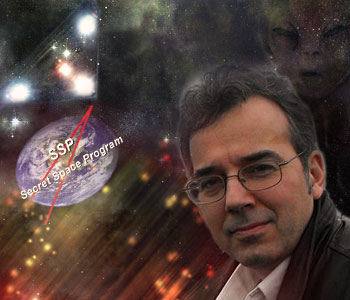 Richard Dolan is one of the world’s leading historians of the UFO phenomenon.

He is the author of two volumes of history, UFOs and the National Security State, as well as an analysis of the future, A.D. After Disclosure: When the Government Finally Reveals the Truth About Alien Contact. He is currently writing UFOs for the 21st Century Mind: A New Primer on the Greatest Mystery of Our Time, due out later this summer.

Richard’s work covers all aspects of the UFO subject, including its extraordinary history, the deep political implications, the mysteries of contact and abduction, ideas about the intelligences behind the phenomenon, the many scientific implications, the evolution of ufology, and considerations about the likelihood and impact of “Disclosure.”

He has written numerous articles, spoken at conferences around the world, is a frequent guest on radio shows such as Coast-to-Coast AM, and has done a great deal of television work.

Richard’s writing is widely seen as ufology’s gold standard. His seminal history, UFOs and the National Security State, has inspired such statements as “the best history ever written about UFOs” by best-selling author Whitley Strieber, and “masterful and important” by Dr. Edgar Mitchell of Apollo 14.

A.D. After Disclosure, which Richard co-authored with Bryce Zabel (creator of the television series Dark Skies), has been widely hailed as among the most original works in all of UFO literature, a fearless and analytical “what if” scenario that discusses the deep impact that would be brought about by the end of UFO secrecy.

Richard was born in Brooklyn, New York, studied at Alfred University and Oxford University, was a finalist for a Rhodes scholarship, and completed his graduate work in history at the University of Rochester. Prior to his interest in UFOs, he studied U.S. Cold War strategy, Soviet history and culture, and international diplomacy.

Richard lives in Rochester, New York, with Karyn Dolan and their two children.