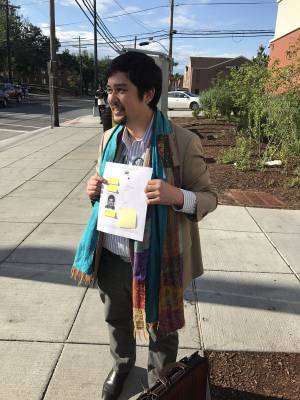 Nic Sakurai, MA, MBA, CPC (they/them pronouns) became the first person in the United States to officially receive a driver’s license with an “X” as an unspecified/other gender markeron June 27, 2017.

Sakurai is a longtime activist, educator and leader, having worked for a national higher education advocacy nonprofit, for American University and for the University of Maryland.  They have been active in LGBTQ+ social justice work for more than 18 years.

Nic first became a resident of Washington, DC in 2003, and has been featured as an agender and queer resident in a photo campaign by the Mayor’s Office on Asian and Pacific Islander Affairs.  They also advocated for the use of gender-neutral language in the constitution proposed by the New Columbia Statehood Commission. (https://statehood.dc.gov/sites/default/files/dc/sites/statehood/publication/attachments/Constitution-of-the-State-of-Washington-DC.pdf)