To Go Where No Mind Has Gone Before with Michael Telstarr! Michael Telstarr is a Master Remote Viewer, and holds 7 World Records in Escapology. Learn to Remote View and Become the Ultimate Psychic Detective! Find lost objects, locate treasure, and missing persons.

Master of Mentalism, Michael Telstarr is MAKING A SPECIAL APPEARANCE at the MEGA UFO CONFERENCE, FEBRUARY 15th -22nd at the Aquarius Resort in Laughlin Nevada. Join him as he amazes you with his entertaining demos to bend metal, levitate objects, and so much more!

Michael Telstarr is a Master Remote Viewer, Master of Mentalism, and holds 7 World Records in Escapology. He is the youngest person to perform "Houdini's Water Cell Torture Escape" at the age of seventeen. He strongly  believes in mind over matter, and the belief we are more than our physical selves. Michael was an escape artist under the name "Scott Free" in his early years performing. He has done upside-down straight-jacket escapes in public, sometimes hanging 90 feet in mid-air in public places such as the Exhibition in Toronto and over Lake Ontario! David Blaine and others has led him to perform some incredible feats.

Michael was an escape artist for 17 years, and has a unique background. Michael was mistreated badly by his father, so he learned to not only perform actual HOUDINI like escapes, but he was also having many obe's, and psychic experiences at fourteen.

Michael has done over 1500 lectures and seminars on Out of Body Adventures, Secrets of Remote Viewing, and Lucid Dreaming. In addition, interviewed over 20,000 people during his tenure with the Psychic Show, CIRCUIT.IN. Not to mention...hundreds of newspaper clippings, and interviews from various magazines. Michael has over four decades of experience as a psychic entertainer and reader.

Michael continues to dazzle people in his private shows and public appearances as a Master of Mentalism. See him bend spoons and keys, guess your underwear color, or see his ability to light up light bulbs at will or levitate objects and move objects. He refers to himself as being a humorist mentalist, not a mental humorist. 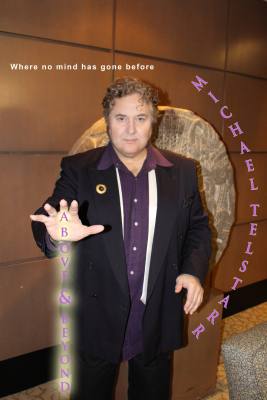