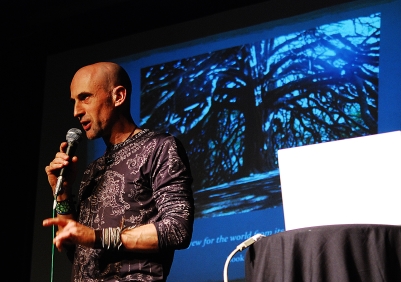 Michael was born in Glasgow, Scotland 1964. He gradually and painfully became aware of his calling as a shaman - healer following a series of near - death experiences in the late 1980's. The first of these involved an encounter with an Elemental (Sulfur) spirit in the far north of Scotland near Thurso (Thor's River.) A second occurred several years later in Edinburgh. The combination of these encounters with numerous others entirely destroyed his health. Michael began to experience visions, prolonged out of body and altered states of consciousness as well as intense physical pain. Managing his life on a daily basis became an impossible challenge. He was finally rescued by a friend who lived in a small cottage close to an incalculably ancient female Yew tree in the south east of Scotland. This marked the beginning of a 9 + year period of healing and the direct transmission of an initiation knowledge that took place under the vast enclosure of the tree. Michael believes that he was led to the Yew tree. He also believes that the Yew sent him to US to communicate its message. The Yew was once regarded by the indigenous and pre -Celtic shaman-healers (original Druids) as a great source of occult experiential knowledge holding the keys to an an ancient language of healing and rejuvenation. A brief account of Michael's experiences under the yew tree can be read in the book Soul Companions-Conversations with Contemporary Wisdom keepers. A Collection of Encounters with Spirit  by Karen Sawyer. He has also written for the shamanic journal Sacred Hoop and for the Journal of Shamanic Practice (article to appear in Spring 2013 issue.)  In 2009 Michael founded the Sacred Yew Institute. The institute offers a two-year professional training in Biodynamic Craniosacral Therapy as well as a lecture series on the occult history of the Yew tree and workshops throughout US in Yewshamanism and The Essence of the Five Trees Teachings. Michael currently lives in rural Western Massachusetts.