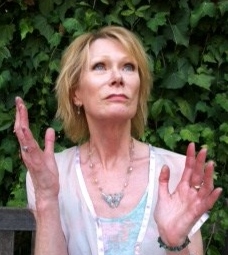 BACKGROUND: -- -- I was born to hold the frequencies of the planet during a very dark and dangerous time; then, once stabilized, to assist in raising them. -- I was the daughter of a veterinarian, a professional actor for 20 years, then became (and still am) a licensed pysychotherapist, a shamanic practitioner, and a "channel." -- Gradually learned while growing up and through early adulthood that I communicated with animal and plants, am an empath, an intuitive, and finally about 10 years ago, that I am clairgnostic (meaning I communicate with energy, itself.) -- Began consciously "channeling" when I was dying. The Ninth Dimensional Pleadian Collective came through to remind me that I knew how to save my life by changing the energy template of my physical body. And so I did. Which was the beginning of MY huge Paradigm Shift! THE CELESTIAL TEAM & ME-- CURRENT STATUS: -- The celestial team asked me to go public with them in 2010. They said it was "time" to begin introducing our human collective to frequencies. -- Just after 12.21.12, they began to braid with me more. The "boundaries" between us began to blur. Then, they began to ask me to transmit most of the messages through my human consciousness. I understand why more clearly than ever NOW-- because there IS no separation. Because as beings of frequency, we all "channel" aspects of ourSELVES, and in this NEW Paradigm we have entered, we need to USE our NEW technology as beings of frequency. It is "TIME!" OUR (the celestial team/me) CURRENT FOCUS: NOW, the focus is on the physics of working with energy as a HUMAN being of frequency. We need to understand our own technology in order to shift OURSELVES into a 5th dimensional perspective-- OUT of the linear, fear-based paradigm of separation, INTO the interconnected, inclusive, paradigm of unity consciousness. We have been IN this NEW Paradigm since 12.21.12, recallibrating, getting "up to speed!" NOW, that process is completed. NOW, the "stakes are high," you might say. The confluence of energy we are currently in is extremely fluid and supportive of transition. It is referred to as the 4th dimension, which is a sort of bridge between the 3rd and the 5th. One can flip easily between the two while acclimating into the lower octave of the 5th. The 4th dimension is the only dimension that serves as such a transitional space, by the way, and that is because the perceptual "gap" between the 3rd and the 5th is so extreme. However, in terms of our human process, this "confluence of energy" is increasingly becoming more like the center of a wheel. The choices we make as to "how we would like to BE" become spokes. It is very easy to jump from one to the other right NOW, trying on frequencies, feeliing our way to our OWN resonance. But within another 3 months, the spokes will be a little farther apart, so a little more challenging to leap between. And so it will go. By around Sept. of 2016, they will be so far apart as "timeline traectories" that they will be VERY far apart. Soon after that, they will be SO far apart that none will be seen at all--except for the "reality" one has chosen-- through FREQUENCY resonance. So, you SEE why we (thecelestial team and I) are presenting the NEW ENERGY TELE-GATHERINGS! It is also why we prenented Energy Tele-Gatherings monthly through the last half of 2014. And why we do videos, and why I (Judith) presented the "POWER TOOLKIT For Energy Alchemists" in 2013... why I focus ALL of my attention 24/7 in learning, as a clairgnostic human/celestial being, on attuning to and working with these NEW Energies in our NEW Paradigm of BEing. Because this is THE moment, and it is humans who will make the shift for the entire universe! Why? Because there is no other being among us who is incarnate for the purpose of developing COMPASSION-- that is what we humans are here for.