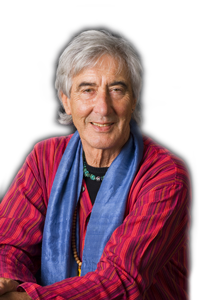 José Argüelles was born January 24, 1939 in Rochester, Minnesota. He and his twin brother, Ivan, were the son of a Mexican father and German-American mother and lived their first five years in Mexico.

Argüelles was best known as the initiator of the world famous Harmonic Convergence global peace meditation, which occurred on August 16-17, 1987. During that time, he also awakened the mass consciousness to the significance of the year 2012 and turned the world’s attention toward the Maya and their calendric system. His best selling book, “The Mayan Factor” (1987) gives credence to the Mayan Calendar’s cycles of natural time, and reveals the historically unprecedented galactic shift in time coming in 2012.

Author of numerous philosophical and cultural essays, as well as poetry, his pioneering books were translated into many languages and include: The Mayan Factor, Earth Ascending, Surfers of the Zuvuya, The Arcturus Probe, Time and the Technosphere: The Law of Time in Human Affairs, the seven volume Cosmic History Chronicles (with Stephanie South) and Manifesto for the Noosphere: The Evolution of Human Consciousness. (For full bibliography see below).

As a prolific artist, Argüelles has provided the illustrations for a number of his books, as well as the cover art for the periodical Psychedelics: Their Uses and Implications (Osmund & Aaronson, 1969). His activity as a painter includes exhibits at the Princeton University Art Museum, 1968, and the Inner City Gallery, Los Angeles, 1969. His murals can still be seen at the Psychology Department, University of California, Davis (1969), and in the Dan Evans Library Building, The Evergreen State College, Olympia, Washington (1972). With Chögyam Trungpa Rinpoche, he assisted in the Dharma Art Exhibits in Los Angeles (1980) and San Francisco (1981). His visionary drawings were also exhibited at the Time is Art Gallery, Portland, Oregon (1999-2000) and his "Doors of Perception" paintings exhibited at the Time is Art Gallery, Ashland, Oregon (2004-2005).

Argüelles is a lifelong arts activist for peace and the planetary transformation of consciousness. In 1968 he co-organized the Transformation Event, New York City, March 25, 1968. He is co-founder with former wife Lloydine of the Planet Art Network (1983), and World Thirteen Calendar Change Peace Movement (1994). The Planet Art Network (PAN) spread to more than 90 countries promoting art as the foundation for global peace, while reviving the Nicholas Roerich Peace Pact and Banner of Peace (1935).

Inspired by prophetic information received from Tony Shearer in 1970, Argüelles distilled his lifelong study of the mathematics and prophecies of the Mayan Calendar into the Harmonic Convergence (1987). This event commemorated the last day of the “Thirteen Heavens and Nine Hell” cycles as prophesied by Mexican prophet Quetzalcoatl.

As a scholar of comparative religion and world thought, he has made major contributions to research on the I Ching, and studied and practiced Tibetan Buddhism for many years with artist and meditation master, Chögyam Trungpa Rinpoche. More recently he had focused his attention on the mathematics of the Qur’an in relation with the Law of Time.

According to the Law of Time, modern humanity is in crisis because it is immersed in an erroneous and artificial perception of time, causing civilization to deviate at an accelerated rate from the natural order of the universe. To remedy this self-destructive situation, a collective unification into galactic consciousness is required. For this reason, José Argüelles promoted the return to a natural timing cycle through the regular measure of the 13-Moon 28-day calendar. Knowing that the Maya used up to 17 calendars simultaneously, and after experimenting living many cycles at once, Argüelles found that the 13-Moon 28-day cycle was more than a calendar, but a master synchronization matrix that all other systems and counts could be synchronized by. For this reason he called it a synchronomoter, a tool for measuring synchronicity.

José Argüelles has received recognition from many cultures. He was a recipient of the Magical Blend 2000 Millennium Award. On March 3, 2002, he was honored as "Valum Votan, Closer of the Cycle" by Nine Indigenous Elders atop the Pyramid of the Sun, Teotihuacán, Mexico. They recognized him as bringing new knowledge to regenerate the traditional knowledge, and awarded him a ceremonial staff for helping to wake humanity up to the meaning of 2012, the conclusion of the 5,125-year Great Cycle of the Mayan Calendar (as well as many other cycles). On October 9, 2003, The Archbishop of the Coptic Orthodox Church of St. Petersburg, Russia, publicly recognized him as the bearer of Mayan prophecy.

He was chief Founder and President of the Foundation for the Law of Time (2000-Present), a non-profit organization that promotes the new time knowledge and 13 Moon calendar.

In 2002, he recognized his apprentice, Stephanie South, and soon thereafter began a process of education known as the Galactic Mayan Mind Transmission that continued until his passing in 2011. In 2005, he began the Noosphere II Project with South, and participated in the Pakal Votan global telepathic experiment in conjunction with ISRICA, a branch of the Russian Academy of Sciences.

In 2005, he initiated the vision of CREST13: Centers for the Restitution, Investigation and Education of the Natural Mind, self-sustainable centers with an eye to global telepathic experiments (www.crest13.org). As a member of the Noosphere Spiritual-Ecological World Assembly (Moscow, Russia) in 2009, he launched the Noosphere World Forum (www.noosphereforum.org).

In 2009, he presented his final 7-day seminar, “Synchronotron” at the Babaji ashram in Cisternino, Italy. In 2009 he was also named Honorary Member of the Club of Budapest.