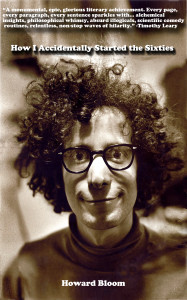 “I know a lot of people. A lot. And I ask a lot of prying questions. But I’ve never run into a more intriguing biography than Howard Bloom’s in all my born days.” Paul Solman, Business and Economics Correspondent, PBS NewsHour

Howard Bloom has been called “next in a lineage of seminal thinkers that includes Newton, Darwin, Einstein,[and] Freud,” by Britain’s Channel4 TV , “the next Stephen Hawking” by Gear Magazine, and “The Buckminster Fuller and Arthur C. Clarke of the new millennium” by Buckminster Fuller’s archivist. Bloom is the author of The Lucifer Principle: A Scientific Expedition Into the Forces of History (“mesmerizing”—The Washington Post), Global Brain: The Evolution of Mass Mind from the Big Bang to the 21st Century (“reassuring and sobering”—The New Yorker), The Genius of the Beast: A Radical Re-Vision of Capitalism (“Impressive, stimulating, and tremendously enjoyable.” James Fallows, National Correspondent, The Atlantic), and The God Problem: How A Godless Cosmos Creates (“Bloom’s argument will rock your world.” Barbara Ehrenreich).

Bloom has been published in arxiv.org, the leading pre-print site in advanced theoretical physics and math. He was invited to tell an international conference of quantum physicists in Moscow in 2005 why everything they know about quantum physics is wrong. And his book Global Brain was the subject of an Office of the Secretary of Defense symposium in 2010, with participants from the State Department, the Energy Department, DARPA, IBM, and MIT.

Bloom has founded three international scientific groups: the Group Selection Squad (1995), which fought to gain acceptance for the concept of group selection in evolutionary biology; The International Paleopsychology Project (1997), which worked to create a new multi-disciplinary synthesis between cosmology, paleontology, evolutionary biology, and history; and The Space Development Steering Committee (2007), an organization that includes astronauts Buzz Aldrin, Edgar Mitchell and members from NASA, the National Science Foundation, and the Department of Defense.

Bloom explains that his focus is “mass behavior, from the mass behavior of quarks to the mass behavior of human beings.” In 1968 Bloom turned down four fellowships in psychology and neurobiology and set off on a science project in a field he knew nothing about: popular culture. He was determined to tunnel into the forces of history by entering “the belly of the beast where new myths, new mass passions, and new mass movements are made.” Bloom used simple correlational techniques plus what he calls “tuned empathy” and “saturated intuition” to help build or sustain the careers of figures like Prince, Michael Jackson, Bob Marley, Bette Midler, Billy Joel, Paul Simon, Billy Idol, Peter Gabriel, David Byrne, John Mellencamp, Queen, Kiss, Aerosmith, AC/DC, Grandmaster Flash and The Furious Five, Run DMC, and roughly 100 others. In the process, he generated $28 billion in revenues (more than the gross domestic product of Oman or Luxembourg) for companies like Sony, Disney, Pepsi Cola, Coca Cola, and Warner Brothers.

Bloom’s focus on group behavior extends to geopolitics. He has debated one-one-one with senior officials from Egypt’s Moslem Brotherhood and Gaza’s Hamas on Iran’s Arab-language international Alalam TV News Network. He has dissected headline issues on Saudi Arabia’s KSA1-TV and on Iran’s global English language Press-TV. And he has appeared fifty two times for up to five hours on 500 radio stations in North America.

Bloom is a former visiting scholar in the Graduate School of Psychology at NYU and a former core faculty member at the Graduate Institute in Meriden, Connecticut. In addition to arXiv.org, his scientific articles have appeared in PhysicaPlus, New Ideas in Psychology, and Across Species Comparisons and Psychopathology. Bloom has also written for The Washington Post, The Wall Street Journal, Wired, Knight-Ridder Financial News Service, the Village Voice, and Cosmopolitan.  Bloom’s 90-minute per episode YouTube series, Howard the Humongous, pulls in a minimum of 45,000 hits and a maximum of 161,000 per installment.

Topping it all off, Bloom’s computer houses a not-so-secret and not-at-all humble project, his 7,100-chapter-long Grand Unified Theory of Everything in the Universe Including the Human Soul. Pavel Kurakin of the Keldysh Institute of Applied Mathematics of the Russian Academy of Sciences says that

“Bloom has created a new Scientific Paradigm. He explains in vast and compelling terms why we should forget all we know in complicated modern math and should start from the very beginning. …Bloom’s Grand Unified Theory… opens a window into entire systems we don’t yet know and/or see, new…collectivities that live, love, battle, win and lose each day of our gray lives. I never imagined that a new system of thought could produce so much light.”

Concludes Joseph Chilton Pearce, author of Evolution’s End and The Crack in the Cosmic Egg, “I have finished Howard Bloom’s books, The Lucifer Principle and Global Brain, in that order, and am seriously awed, near overwhelmed by the magnitude of what he has done. I never expected to see, in any form, from any sector, such an accomplishment. I doubt there is a stronger intellect than Bloom’s on the planet.”

Nobel-Prize winner Dudley Herschbach calls Bloom’s insights “truly awesome.” There’s a reason. Bloom’s perspective comes from a once–in-the-history-of-science approach to the study of mass moods and cultural convolutions. Bloom started out normally enough, diving into microbiology, theoretical physics, and cosmology at the age of ten, building his first Boolean algebra machine at the age of twelve, becoming a dedicated microscopist that same year, codesigning a computer that won prizes at local science fairs before he left grade school, and being granted a private brainstorming session with the head of the Graduate Physics Department at the University of Buffalo when he was still twelve. By sixteen he was a lab assistant at the world’s largest cancer research center, the Roswell Park Memorial Research Cancer Institute, where he helped plumb the mysteries of the immune system. And before his freshman year of college he designed and executed research in Skinnerian programmed learning at Rutgers University’s Graduate School of Education.

The pinnacles of fame provided surprising raw material for scientific analysis. “When you’re at the center of the sort of attention-storm that hits when you’re working with a superstar,” Bloom says, “it’s as if the laws of physics change. Hormones charge you up in ways you never imagined. Time perception alters. You resolve crises in minutes, seeing solutions instantly, solutions that previously would have taken you weeks.

“More important is the impact of a communal ritual like a rock concert. The star onstage is taken over by a self he doesn’t know, one that seems to surge through him as if he were a length of empty pipe. The force of this strange passion welds the audience in an almost transcendent bond.” Bloom’s task was to first experience the exaltation, then to dissect it. “The model for this work,” he says, “cames from William James, who attempted to feel the ecstatic experiences of mystics, then to probe these experieces scientifically, a process that led to his 1902 book The Varieties of the Religious Experience.”

Bloom’s forays into power and its manipulations were also intense. “In the music and film industry everyone knew that money and career advancement were on the line. But few realized how deeply what they did affected the lives of millions, and even fewer felt the responsibility that demands. It was an amazing privilege to work as an equal with the entertainment industry’s elite, many of whom I either had to woo or thwart to help my clients reach their audience with a message of genuine value. Some executives were master strategists but used their intelligence to increase their own stature, often at a brutal cost to others. Others were far more ethical. Yet even the best-intentioned employed boardroom and backroom tactics handed down from the politics of chimpanzees. Without knowing it, they used tricks of leadership we share with social animals from lizards and lobsters to baboons and mountain apes.”

The subculture of Washington politics was, to Bloom, the most disturbing of them all. Bloom co-founded Music in Action, a national anti-censorship organization. This brought him into head-on combat with Tipper Gore, wife of Vice President and eventual presidential candidate Al Gore. Says Bloom, “Tipper and the right wing religionists who used her for their ends were masters of perceptual manipulation. They perpetrated hoaxes of outrageous transparency, yet still managed to convince the press and public that their falsifications were true.”

Twenty pages in The Billboard Guide to Music Publicity are devoted to Bloom and to the antidote he invented, “perceptual engineering,” which he defines as “a way of finding a valid truth that the herd refuses to see, then turning the herd around and making that truth self-evident. It’s what we do in much of science–seeing the ordinary from a new perspective, then revealing what makes it tick, and in the process altering society’s views.”

In 1981, Bloom organized the material he’d unearthed and began the formal research for a new theoretical structure that would first reveal itself in 1995′s The Lucifer Principle: A Scientific Expedition Into the Forces of History. And he continued pursuing scientific truths in unconventional ways. In 1995 Bloom headed an insurgent academic circle called “The Group Selection Squad” whose efforts precipitated radical re-evaluations of neo-Darwinist dogma within the scientific community. In 1997, he founded a new discipline, paleopsychology, whose participants included physicists, psychologists, microbiologists, paleontologists, entomologists, neuroscientists, paleoneurologists, invertebrate zoologists, and systems theorists. Paleopsychology’s mandate was to “map out the evolution of complexity, sociality, perception, and mentation from the first 10(-32) second of the Big Bang to the present.”

Evolutionary biologist David Sloan Wilson has written that with his beyond-the-box insights Bloom has “raced ahead of the timid scientific herd” often “vaulting over their heads” with a “grand vision” that “we do strive as individuals, but we are also part of something larger than ourselves, with a complex physiology and mental life that we carry out but only dimly understand.” In The Lucifer Principle, Global Brain, The Genius of the Beast, and his new book The God Problem: How A Godless Cosmos Creates, Howard Bloom brings those understandings from dimness into the light.