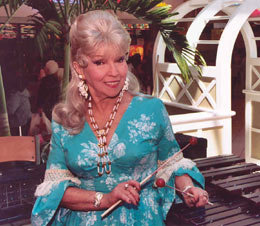 Gloria Parker has spent a lifetime creating and performing music to the delight of people of all ages. A consummate entertainer and musician, Gloria fronted several bands including the all-girl band, "Gloria Parker and the Coquettes". Alphonse D'Artega wrote many of the bands musical arrangements and they played D'Artega's hit song "In The Blue Of Evening". She has wowed thousands with her musicianship on the marimba, violin, vocally, and the musical glasses.

Gloria has authored hit songs, appeared in film, conducted for Judy Garland, played with the Hartford Symphony, and appeared with Lionel Hampton, who recorded many of her songs. She has also made several television appearances as a featured guest with Joe Franklin, Alan Combs, The Late Night Show with David Letterman, The Ed Sullivan Show, and Philbin.

Gloria has just finished her new book "Corruption Reigns In Our Courtrooms", Please go to the New Book & CD Tab for more information and see quotes from our many new readers.