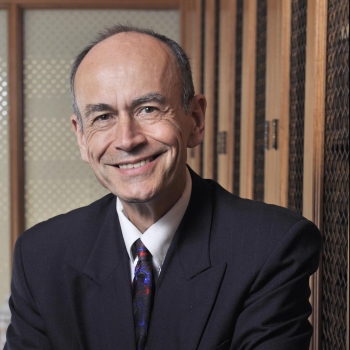 Thomas Christian Südhof (born December 22, 1955) is a German-American biochemist well known for his study of synaptic transmission. Currently, he is a professor in the School of Medicine in the Department of Molecular and Cellular Physiology, and by courtesy in Neurology, and in Psychiatry and Behavioral Sciences at Stanford University.

He is the co-awardee of the 2013 Nobel Prize in Physiology or Medicine (with James Rothman and Randy Schekman) for work on vesicle trafficking.

A German native, Südhof was born in Göttingen in 1955. He spent his childhood in Göttingen and Hannover, and was a graduate from the Hannover Waldorf School in 1975. Südhof studied medicine at the RWTH Aachen University, Harvard University, and then the University of Göttingen where, in 1982, he obtained his M.D. The same year, Südhof finished work on his doctoral thesis, in which he described the structure and function of chromaffin cells, at the Max Planck Institute for Biophysical Chemistry in the lab of Victor P. Whittaker. After a brief postdoctoral fellowship in Whittaker’s lab, Südhof moved to the United States in 1983, where he began postdoctoral training in the department of molecular genetics at the University of Texas Health Science Center (now the UT Southwestern Medical Center) in Dallas, Texas, under the supervision of Michael Stuart Brown and Joseph L. Goldstein.

During his postdoctoral fellowship, Südhof worked to describe the role of the LDL receptor in cholesterol metabolism, for which Brown and Goldstein were awarded the Nobel Prize in Physiology or Medicine in 1985. Südhof finished his postdoctoral training in 1986 and was made an investigator of the Howard Hughes Medical Institute. He was also given his own laboratory at UT Southwestern Medical Center where he focused on the Presynaptic Neuron for over 20 years.

In 2008, Südhof moved to Stanford University and is currently the Avram Goldstein Professor in the School of Medicine as well as a Professor of Molecular & Cellular Physiology, Psychiatry, and Neurology.

He ascribed his powers of analysis and concentration to boyhood lessons with his bassoon teacher, Herbert Tauscher.