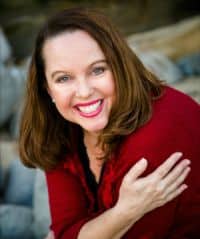 Dondi Simone Dahlin is a published author, award-winning public speaker, and internationally-acclaimed dancer, actress, and teacher. She co-wrote The Little Book of Energy Medicine (Tarcher, 2012) with her mother, Donna Eden, and heads the “Teach the Teacher” program at The Eden Energy Medicine Certification Program in Phoenix, Arizona, where she also teaches teachers public speaking. From 2001-2008 Dondi taught the Five Elements at the renowned Feathered Pipe Ranch in Montana. She has been teaching the Five Elements for over a decade at OMEGA Institute in New York and at various Eden Energy Medicine workshops around the world since the 1990s.

Dondi has been on stage and in television, film and radio since she was a little girl doing acting, dance, voice-overs, and public speaking. She is at home in front of cameras and audiences after performing for over three decades and in over 30 countries. As a college student, she received the coveted, “Outstanding Speaker in the Nation” award and is currently a member of The Screen Actors Guild. As a touring dancer, she was chosen to be the main radio and TV spokesperson for Miles Copeland and “The Belly Dance Superstars,” a 14-person professional dance troupe that performed in over 10 countries and 20 states.

Dondi joined Innersource, after performing around the world for over two decades, and loves being a part of the family business. She has a multifaceted role in the company from writing handbooks and documents to helping teach and coordinate TEEM (Teaching Eden Energy Medicine), to being the company photographer, to helping write books like, The Little Book of Energy Medicine