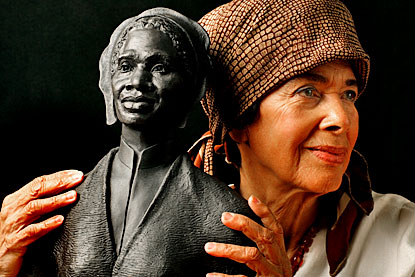 Artis Lane was born in North Buxton in southern Ontario, Canada, on May 14, 1927. When she was two years old, Lane’s family moved to Ann Arbor, Michigan, where Lane attended school and began to distinguish herself as an artist. By the age of fifteen, she was painting portraits of her classmates, and after graduating from high school, she was awarded a scholarship to the Ontario College of Art in Toronto. After graduating, she married journalist Bill Lane and moved with him to Detroit, where the Urban League, Detroit Chapter, played an instrumental role in Lane’s being the first woman to be admitted to Cranbrook Art Academy. Lane used her artistic talent to help support her family by painting portraits of auto industry executives and then Governor of Michigan George Romney.

Lane met actress Diahann Carroll shortly afterwards, and moved to New York City, where she continued to paint portraits while becoming a member of Portraits Incorporated. She soon moved to Los Angeles and began working with Universal Studios. There, she met actor Cary Grant, and the two became close friends. Over the ensuing decades, she was commissioned to paint such notables as President John F. Kennedy, Frank Sinatra, Henry Kissinger, Barbara Bush, Rosa Parks, Michael Jordan and Aretha Franklin, among others. In addition to her portraitures, Lane created bronze sculptures for the National Council of Negro Women’s Dorothy Height and Mary McLeod Bethune.

Lane has created bronze sculptures for the Soul Train Awards and has designed book covers and the original logo for the Dance Theatre of Harlem. Lane has held exhibitions throughout the United States and Canada. Her works can be seen in the Smithsonian Institution, the University of Missouri Library, AT&T’s corporate collection, the offices of Motown Records and numerous private galleries.

Lane is the recipient of numerous awards, including the Women of Excellence Award from the Chatham-Kent Family YMCA in Canada, the Museum of African American Art Award in Los Angeles, and the Women for Women Award from the Martin Luther King, Jr. General Hospital Foundation. In 2004, Lane continued to live and work in Los Angeles.